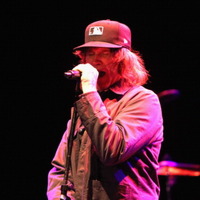 Mark Lanegan net worth: Mark Lanegan is an American musician and singer-songwriter who has a net worth of $1 million. Mark Lanegan was born in Ellensburg, Washington in November 1964. He formed the band Screaming Trees in 1984. Screaming Trees released their debut studio album Clairvoyance in 1986. They released the albums Even if and Especially When in 1987, Invisible Lantern in 1988, Buzz Factory in 1989, and Uncle Anesthesia in 1991. Their album Sweet Oblivion was released in 1992 and reached #4 on the US Heatseekers chart. Screaming Trees released the album Dust in 1996 which reached #5 on the US Heatseekers chart as well as #32 in the UK and #39 in Canada. They had success with the singles "Bed of Roses", "Nearly Lost You", "Dollar Bill", "All I Know", and "Dying Days". As a solo artist he has released eight studio albums. He was a member of the band Queens of the Stone Age and also worked with Kurt Cobain.