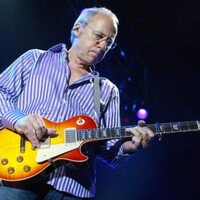 What is Mark Knopfler's net worth?

Mark Knopfler is a British songwriter, film score composer, guitarist and record producer who has a net worth of $105 million dollars. Mark Knopfler is most widely recognized as the lead vocalist, guitarist, and writer for the band, Dire Straits. Dire Straits disbanded in 1995. Additionally, he has served as a guest session artist for multiple musicians and provided the scores for such films as, "The Princess Bride", "Wag the Dog", and "Last Exit to Brooklyn".

Mark Freuder Knopfler was born on August 12, 1949 in Glasgow, Scotland, United Kingdom, to an English mother, Louisa Mary, and a Hungarian-Jewish father, Erwin Knopfler. His mother was a teacher and his father was an architect who left Hungary in 1939 to flee the Nazis. The Knopfler family lived in the Glasgow area until they moved to his mother's hometown of Blyth in North East England when Mark was seven years old, where he began attending Gosforth Grammar School.

Mark became inspired by different styles of music at an early age, thanks to early exposure by his uncle Kingsley's harmonica and boogie-woogie piano playing. Mark lusted after a pricey Fiesta Red Fender Stratocaster electric guitar but had to settle for a 50 dollar Hofner Super Solid in his young years. He took a job when he was 13 at the Newcastle Evening Chronicle newspaper where he earned six shillings and sixpence in 1963. At this job, Mark met the aging poset Basil Bunting, who worked as a copy editor. The two rarely spoke but in 2015 Knopfler wrote a tribute track to him.

During the '60s, Mark formed and joined several bands while gaining inspiration from singers like Elvis Presley and guitarists Chet Atkins, Hank Marvin, B.B. King, and many more. At 16, he made a local TV appearance as part of a harmony duo with his classmate Sue Hercombe. He studied journalism for a year at Harlow College and then was hired as a junior reporter in Leeds for the Yorkshire Evening Post. He made friends with the local furniture restorer who also happened to be a country blues enthusiast and part time performer Steve Phillips. The two subsequently formed a duo called "The Duolian String Pickers", which performed in local folk and acoustic blues venues across Leeds.

Two years later, Mark went back to school and graduated with a degree in English from the University of Leeds. In April 1970, Knopfler recorded a demo disc of an original song he had written called "Summer's Coming My Way." The recording included Knopfler (guitar and vocals), Steve Phillips (second guitar), Dave Johnson (bass), and Paul Granger (percussion). Johnson, Granger, and vocalist Mick Dewhirst played with Knopfler in a band called Silverheels. Knopfler moved to London in 1973 and joined a band called Brewers Droop. During this time he taught himself how to play acoustic guitar and continued performing with local pub bands, while working a job as a lecturer at Loughton College in Essex, a position he held for three years. In the mid '70s, he devoted much of his musical energies to his newest group the Cafe Racers. His brother David, future founder and bandmate of Dire Straits, moved to London where he shared a flat with guitarist John Illsley. In April 1977, Mark moved in with John and David and the three began playing music together.

Knopfler is best known as the front man, vocalist and lead guitarist for rock band Dire Straits, which he co-founded with his brother David Knopfler in 1977. Their first album, "Dire Straits," released with little fanfare in the UK. However, when their single "Sultans of Swing" was released, it became a chart-topper in the Netherlands and album sales took off across Europe, then the U.S. and Canada, and then finally the UK. Their second album, "Communique," followed in 1979. Their third album "Making Movies" was released in 1980, and it contained many of Mark's most personal compositions. Their next studio album "Love over Gold" was released in 1982 and charted at the top of the albums charts. 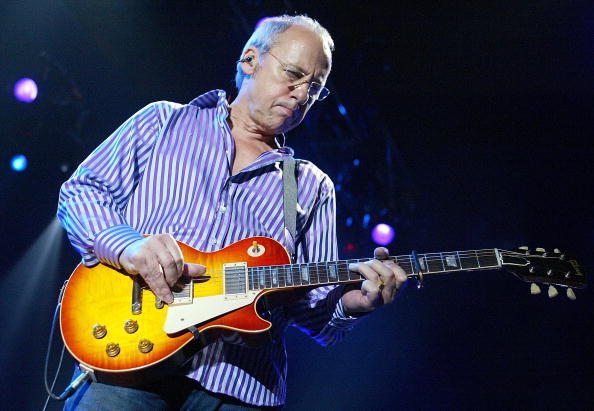 During 1983 and 1984, Knopfler was involved with other projects as well, including writing and producing the music score to the film "Local Hero", which was met with great success. During this time, Mark produced Bob Dylan's "Infidels" album and wrote the song "Private Dancer" for Tina Turner's comeback album of the same name. Dire Straits' biggest studio album was their fifth, "Brothers in Arms" in May 1985. It became an international blockbuster that sold over 30 million copies worldwide and became the fourth best-selling album in UK chart history. It spawned several chart singles including the No. 1 hit in the U.S. "Money for Nothing."

After the Brothers in Arms world, tour, the band ceased to work together for some time. They regrouped in 1988 at Wembley Stadium for the Nelson Mandela 70th Birthday Tribute concert. In September 1988, Mark announced the official dissolution of Dire Straits. Following one final tour, Knopfler took some time off from the music business. In 2018, the band was inducted into the Rock and Roll Hall of Fame. Knopfler did not attend the ceremony. Dire Straits remains one of the most popular British rock bands as well as one of the world's most commercially successful bands, with worldwide album sales of more than 120 million

Knopfler's first solo album, Golden Heart, was released in March 1996 and featured the single Darling Pretty, which made it onto the soundtrack of the 1996 film Twister. In 1997, Knopfler recorded the soundtrack for the movie "Wag the Dog." 2000 saw the release of his next solo effort, "Sailing to Philadelphia," his most successful to date, helped by a number of notable contributors to the album including Van Morrison. He released his third solo album in 2002, "The Ragpicker's Dream." His planned tour was subsequently canceled after he suffered a broken collarbone in a motorbike crash. His fourth album came out in 2004. Mark released four more solo albums between 2007-2018 and has gone on several world tours.

He has performed with such high-profile artists as Chet Atkins, Eric Clapton, Bob Dylan, Emmylou Harris, Van Morrison, Steely Dan, Sting and James Taylor. Knopfler is known for his finger-style guitar technique and was ranked 27th on Rolling Stone magazine's list of 100 Greatest Guitarists of All Time. He is a four-time Grammy Award winner and the recipient of three honorary doctorate degrees in music from universities in the United Kingdom. Knopfler is considered the most celebrated British guitarist to emerge in the '70s and '80s. At a time when punk and new wave music were making technique seem irrelevant and metal bands were taking the guitar solo in a noisier, less predictable direction, Knopfler's clean but dexterous picking proved there was still a place for traditionalism in mainstream rock & roll.

Knopfler has been married three times. His first marriage was to Kathy White, his longtime girlfriend from his school days. In November 1983, he married his second wife Lourdes Salomone and they had twin sons Benji and Joseph, born in 1987. On Valentine's Day 1997, Knopfler married his third wife, British actress and writer Kitty Aldridge. They have two daughters.