Mario Domm net worth: Mario Domm is a Mexican singer and songwriter who has a net worth of $20 million. Mario Domm was born in Torreon, Coahuila, Mexico in January 1977. His styles include Latin music, pop, and soul and he plays the piano, drums, guitar and bass. He is best known for being the lead singer of the band Camila as well as his solo work.

Camila formed in 2005 and released their debut studio album Todo Cambio in 2006. The album reached #1 on the US Latin and US Latin Pop charts and reached #2 in Mexico. The group's second album Dejarte de Amar was released in 2010 and reached #1 on the same three charts. Their third album Elypse was released in 2014. Camila has had #1 singles in Mexico or on the US Latin Pop charts with the songs "Todo Cambrio", "Mientes", "Alejate de Mi", "Besame", "De mi", "Entre Tus Alas", and "De Que Me Sirve La Vida". As a solo artist Domm released the album Mexi-Funky-Music in 2002. He wrote the #1 hit "Causa y Efecto" for Paulina Rubio. With Camila he won three Latin Grammy Awards. 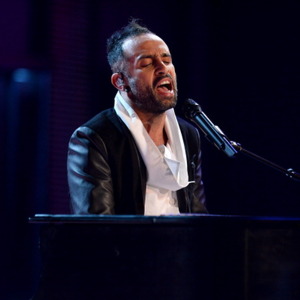