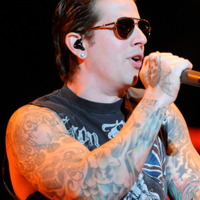 M. Shadows Net Worth: M. Shadows is the lead vocalist, songwriter, and founding member of the American heavy metal band Avenged Sevenfold who has a net worth of $20 million dollars. M. Shadows was born Matthew Charles Sanders on July 31, 1981 in Huntington Beach, California where he began singing at an early age, but his interest in rock music grew as he became older and began to play the guitar. Shadows formed Avenged Sevenfold in 1999 along with middle school friends Zacky Vengeance, The Rev, and Joshua Hernandez. Shadows says that he chose "M. Shadows" as his stage name because he thought of himself as "the darker character in the group". Shadows has a baritone vocal range. Shadows' vocal style has evolved significantly over the years. On the band's first full-length record, "Sounding the Seventh Trumpet", he featured harsh, metalcore-style growls with limited instances of clean vocals. The release of "Waking the Fallen" in 2003 demonstrated his progression towards melodic vocal lines, but still retained a strong screaming influence. However, the most significant change came with the release of the band's major label debut, "City of Evil", in 2005, which featured minimal background screaming, stronger vocal melodies, and increased emphasis on harmonies and melodic hooks. Rumors were spread that Shadows had lost his ability to scream due to throat surgery needed after Warped Tour 2003. However, this was proven false.