Lzzy Hale Net Worth: Lzzy Hale is an American guitarist and frontwoman who has a net worth of $2 million. Born in Red Lion, Pennsylvania, in 1984, Lzzy Hale started writing and performing music before her 14th birthday. She released her debut EP, "Don't Mess With the Time Man", with her brother in 1999.

A year earlier, she formed the band Halestorm. The group has released two studio albums: 2009's "Halestorm", which climbed to number 40 on the U.S. charts, and 2012's "The Strange Case Of…", which broke into the top 20. The group previously released a handful of EPs, including 2001's "Breaking the Silence", 2006's "One and Done", and 2011's "Reanimate: The Covers EP". Halestorm won a Grammy Award in 2013 for Best Hard Rock/Metal Performance for "Love Bites (So Do I)" off their second album. Hale has performed with several other acts, including Shinedown, Seether, Black Stone Cherry, Adrenaline Mob, and Evanescene's Amy Lee. She sang with David Draiman and was part of the tribute album, "Ronnie James Dio, This Is Your Life", which released in the spring of 2014. In 2009, she was named one of the hottest chicks in metal by "Revolver" magazine. Hale has been featured on several late night talk shows, including "The Tonight Show with Jay Leno" and "Late Night with Jimmy Fallon". 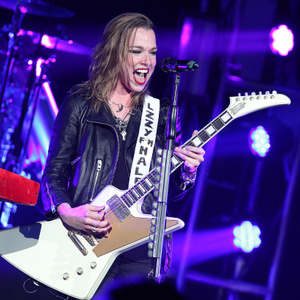