Lindsey Stirling net worth: Lindsey Stirling is an American violinist, composer, dancer and performance artist who has a net worth of $12 million. Lindsey Stirling was born on September 21, 1986 in Santa Ana, California. She was inspired to take up the violin at the age of five after her father introduced her to classical music.

Over the next 12 years, Lindsey took private violin lessons and showed immense natural talent. At the age of 16 she formed a band with a group of high school friends. In one of the band's songs, Lindsey composed a violin rock solo that became a huge hit among their friends and school mates. Thanks to the song Lindsey would eventually be crowned Arizona's Junior Miss. At 23, in 2010, she auditioned for America's Got Talent. She eventually made it to the quarter finals. After appearing on America's Got Talent, Lindsey began producing videos specifically for YouTube. The videos were a huge hit. Today she has over 8 million subscribers on youtube and her videos have been viewed over 1.5 billion times. Her most popular video "Crystallize – Lindsey Stirling (Dubstep Violin Original Song)" has been viewed more than 150 million times since being uploaded in February 2012. Lindsey attended BYU in Provo, Utah where she studied recreational therapy. She has also done missionary work for the Mormon church. 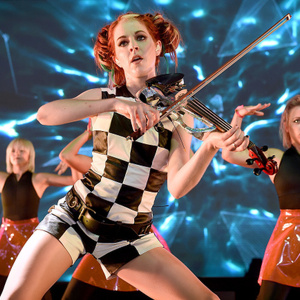