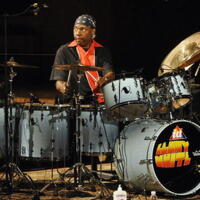 Lenny White net worth: Lenny White is an American jazz fusion drummer who has a net worth of $3 million. Lenny White was born in New York City, New York in December 1949. He is best known for being the drummer of the band Chick Corea's Return to Forever. As a bandleader White released the albums Venusian Summer in 1975, Big City in 1977, The Adventures of Astral Pirates in 1978, Streamline in 1978, Best of Friends in 1979, Just Like Dreamin' in 1981, Attitude in 1983, In Clinic in 1983, Present Tense in 1995, Renderers of Spirit in 1996, Edge in 1999, Collection in 2002, The Love Has Never Gone: Tribute to Earth, Wind & Fire in 2004, Hancock Island in 2008, and Anomaly in 2010. Return to Forever has released the albums Return to Forever, Light as a Feather, Hymn of the Seventh Galaxy, Where Have I Known You Before, No Mystery, Romantic Warrior, Musicmagic, and Forever. As a sideman Lenny White has also been featured on albums by Azteca, Gato Barbieri, Ron Carter, Stanley Clarke, Al Di Meola, Larry Coryell & Victor Bailey, Chaka Khan, and more.