Lars Frederiksen net worth: Lars Frederiksen is an American guitarist and vocalist who has a net worth of $13 million. Lars Frederiksen has earned his net worth as lead vocalist and lead and rhythm guitar player for the punk band Rancid. He is also the frontman for the own band called Lars Frederiksen and the Bastards as well as the group The Old Firm Casuals. In 1991 he was a short-term member of the band UK Subs. He has been a member of Rancid since 1993. He is present on the band's second album Let's Go, in addition he has also produced albums for some well-known groups such as Agnostic Front, The Business, Dropkick Murphys, Swingin Utters, Anti-Heros, Patriot, The Forgotten, and Pressure Point. Lars was born on August 30, 1971 in Campbell, California. He is of both Danish and Italian descent. He is married to Stephanie Snyder and they have two children. He appeared in the documentary film, The Other F Word and on several episodes of Tim Time bomb's Rock n Roll Theater as Dante. Rancid has been performing together for more than 20 years. 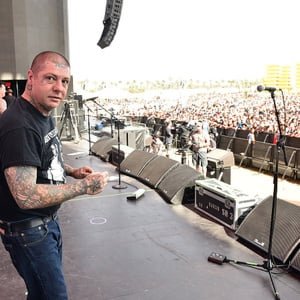