Larry Carlton Net Worth:Larry Carlton is an American jazz, blues, pop and rock guitarist who has a net worth of $2 million. Larry Carlton was born March 2, 1948 in Torrance, California. He started learning to play guitar when he was six years old, studying under Slim Edwards near his Torrance home.

In high school, he took an interest in jazz, his playing style influenced by Joe Pass, Wes Montgomery, Barney Kessel and B.B. King. He also cites saxophonist John Coltrane as making a notable impression on him. Before he transitioned completely to a solo career, Carlton became one of the most in-demand studio musicians of the past three decades. Carlton's catalog of work includes film soundtracks, television themes and work on more than 100 gold albums. During the '70s and early '80s, Carlton was a session musician in Los Angeles, making as many as 500 recordings a year, including albums with Steely Dan, Joni Mitchell, Billy Joel, Michael Jackson, Quincy Jones, The Four Tops, Christopher Cross and Barbra Streisand. In 1988, while working on his electric guitar LP On Solid Ground, Carlton was the victim of a random act of violence, shot in the throat outside his private studio in California. The bullet shattered his vocal cord and caused significant nerve trauma. Carlton managed to recover quickly and completed On Solid Ground by the end of the year. He continued his work with the electric guitar in 1991 when he started to record a blues album, but decided to delay the project to meet demand for a more commercially-oriented jazz offering, which resulted in Kid Gloves. Renegade Gentleman was released in 1993, featuring Nashville, Tennessee harmonica player Terry McMillan on several tracks. From 1994 to 1997 Carlton participated in various tours (most notably with Toto guitarist Steve Lukather) and released an album (Larry & Lee).

In 1997, Carlton took Lee Ritenour's place in Fourplay. Carlton went on to release solo albums and even joined Steely Dan as a guest guitarist for six dates on tour in 2009. Carlton married contemporary Christian music artist Michele Pillar in 1987. He is the father of Katy Carlton and bass player Travis Carlton. 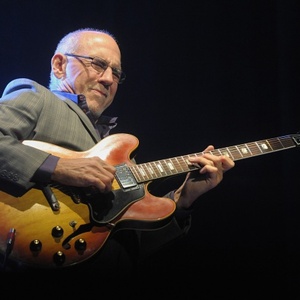