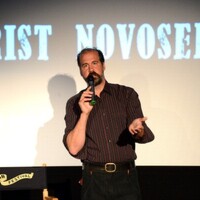 What is Krist Novoselic's Net Worth?

Krist Novoselic is an American rock musician who has a net worth of $80 million. He is probably best known as the former bass guitarist of the massively popular rock band Nirvana, which reached considerable fame and success during the 90s. After frontman Kurt Cobain passed away in 1994, Novoselic went on to form bands such as Sweet 75 and Eyes Adrift. He has also collaborated with bands like Flipper, Giants in the Trees, and Foo Fighters over the years.

Outside of his music career, Novoselic is well known for his political activities. He founded a PAC called JAMPAC, and he has written weekly political and musical columns for "Seattle Weekly." In addition, he has been involved in various electoral reform projects over the years.

Krist Anthony Novoselic was born on May 16th of 1965 in Compton, California. Raised alongside two siblings by Croatian immigrants, Krist relocated with his family to San Pedro, Los Angeles. This neighborhood was famous for its high number of Croatian residents. In 1971, he relocated once again with his family, this time to Aberdeen, Washington. Nine years later, the 14-year-old Novoselic was sent to live with relatives in Zadar, Croatia. He spent one year in his parents' home nation before returning to Aberdeen. During his time in Croatia, he became a semi-fluent Croatian speaker.

During his younger years, Krist became obsessed with bands like Led Zeppelin, Black Sabbath, and Van Halen. During his time in Croatia, he fell in love with punk rock and was introduced to bands like the Sex Pistols and the Ramones. He was inspired to play the bass by figures like Paul McCartney, Geezer Butler, and Gene Simmons.

Krist was introduced to Kurt Cobain through his younger brother, who was friends with Cobain. When Kurt discovered Krist's love for punk rock music, the two bonded over their shared passion. Cobain eventually showed Novolesic his demo tape, and the two eventually started a band together. However, this band only lasted a few weeks before it disbanded, and Kurt and Krist went their separate ways.

It wasn't long before Cobain and Novolesic agreed to work together once again, but this time they started a fairly mundane cover band. The pair were essentially motivated by money at this point, as they just wanted to get paid for shows. After meeting a drummer named Aaron Burckhard, they formed the band that would eventually become Nirvana. Around this time, they recorded the album "Bleach" in 1989. A number of additional drummers then came and went, until Kurt and Krist settled on Dave Grohl.

The group then signed a record deal with DGC Records. This led to their second album, "Nevermind." This proved to be a massive hit, fueled by the worldwide success of their hit single, "Smells Like Teen Spirit." Over the next few years, the band became incredibly popular and released further albums such as "Incesticide." This album contained a number of hits written by Krist.

In 1993, the band released "In Utero." This album sold 3.5 million copies in the United States alone, and it would prove to be their last.

During his time with Nirvana, Krist reportedly warned Kurt Cobain to kick his heroin habit on several occasions. Kurt reportedly called Novoselic immediately after he took heroin for the first time, at which point Krist immediately warned the young musician to never do it again. As Cobain continued to take heroin and Novoselic continued to warn him about the drug, the relationship between the two singers eventually became strained. Finally, it got to the point where Novoselic gave up, hoping that Kurt would fix his behavior on his own and "hit rock bottom." That moment never came, and Cobain passed away before he could hit rock bottom and see the error of his ways.

In 1994, Kurt Cobain died. This marked the end of Nirvana, and Krist went on to pursue various other musical ventures. Very quickly, he established the band Sweet 75 and released an album with this group in 1997. By 2002, he was collaborating with the Foo Fighters, which was the band that Dave Grohl had founded following the end of Nirvana.

Krist then created another band called Eyes Adrift, and after a single album, he announced that he was quitting the music business entirely. However, he went on to collaborate with groups like Flipper, Foo Fighters, and others. Although he and Grohl initially agreed that they would not collaborate together with Foo Fighters, Krist eventually became a more involved member of the group, recording on a number of their albums and performing with them on tour on numerous occasions.

Despite initially being supportive of Democratic figures like Barack Obama, he later severed all ties with the Democratic party. He has since been supportive of libertarian figures such as Ron Paul. He has continued to support libertarian candidates throughout the years. He also once called Trump "strong and direct," and the resulting criticism caused him to delete his Facebook and Twitter accounts.