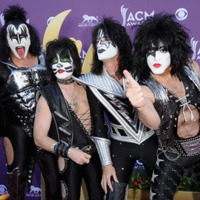 Kiss Net Worth: Kiss is an American rock and roll band that has a net worth of $300 million. Kiss formed in New York City, New York in January 1973. The band is known for their face paint stage outfits, as well as their elaborate live performances. They have been awarded more gold albums than any other American rock band with 28. They have sold more than 100 million records worldwide and more than 40 million in the United States alone. The band has gone through many lineup changes, but two members have been with the band since day 1: Paul Stanley on lead vocals and rhythm guitar, and Gene Simmons on lead vocals and bass. The band was formed with Ace Frehley on lead guitar and vocals and Peter Criss on drums and vocals. The two both left the band in the early 1980s but later came back from the late 1990s to early 2000s. The current lineup of Kiss includes Stanley, Simmons, Tommy Thayer on lead guitar and vocals, and Eric Singer on drums and vocals. Other members of Kiss have been Vinnie Vincent, Mark St. John, Bruce Kulick, and Eric Carr. Kiss are known for their comic book-style characters and have been named #10 on VH1's 100 Greatest Artists of hard Rock, #9 on MTV's Greatest Metal Bands, #1 on Hit Paraders' Top 100 live Bands, and more. In April 2014 Kiss was inducted into the Rock and Roll Hall of Fame. They have released 24 studio albums.