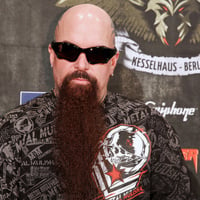 Kerry King net worth: Kerry King is an American lead and rhythm guitarist who has a net worth of $8 million. Kerry King has earned his net worth as a member of the band Slayer. Kerry King was born June 3, 1964 in Los Angeles, California. When he was a teenager, he started learning guitar at Calvano's music in South Gate California. In 1981, he was trying out for the position as a guitarist in a band and after the session was over Jeff Hanneman approached him and the two began playing Iron Maiden and Judas Priest songs with the session drummer. Today Kerry is best known for being the lead guitarist and cofounder of American thrash metal band Slayer. Kerry and Metallica drummer Lars Ulrich have been described as the most influential persons in heavy/thrash metal. Those two bands, have influenced countless other bands. The entire thrash generation, was built on the albums Show No Mercy and Kill'em all. Over the years, Kerry's guitar style has remained similar, giving him a very distinctive sound. He is one of the most distinctive soloists in metal: focusing more on speed and chaos than on melody or typical metal-style technical precision. He typically makes extensive and unorthodox use of whammy bar and uses a very heavy, irregular vibrato. Some fans and critics have disapproved of his solo style. One of his hobbies is breeding snakes and show-dogs. He is a long time and noted herpetoculturist and snake breeder who is known to pop up at Southern California reptile events and pet shops with little notice. In 2005, he participated in an online chat discussion with both music and snake fans at the popular online reptile community kingsnake.com where he discussed both his involvement with Slayer and his interest in reptiles. He is a big fan of hockey and football. Usually he wears a sports shirt, when performing.