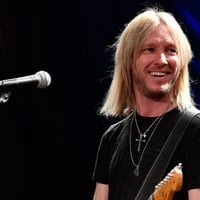 Kenny Wayne Shepherd net worth: Kenny Wayne Shepherd is an American guitarist, singer, and songwriter who has a net worth of $10 million. Kenny Wayne Shepherd was born in Shreveport, Louisiana in June 1977. He is completely self-taught and does not know how to read music. He started out playing plastic guitars at three or four years old. After meeting Stevie Ray Vaughan he got serious about the guitar at seven years old. His debut studio album Ledbetter Heights was released in 1995 and was certified Platinum in the US and reached #1 on the US Blues chart. His second album Trouble Is… in 1997 and third album Live On in 1999 also were certified Platinum in the US and hit #1 on the US Blues chart. His albums 10 Days Out: Blues from the Backroads in 2007, How I Go in 2011, and Goin' Home in 2014 also reached #1 on the US Blues chart, as did his 2010 live album Live! in Chicago. Shepherd's best known single is "Blue on Black" which reached #1 on the US Mainstream Rock chart. His other singles "Deja Voodoo", "Slow Ride", "Somehow, Somewhere, Someday", "Everything is Broken", "In 2 Deep", and "Was" also reached the Top 10 on the US Mainstream Rock chart. Fender Musical Instruments Corp. released the Kenny Wayne Shepherd Series Stratocaster in 2008. He has been nominated for five Grammy Awards. Kenny married Mel Gibson's daughter Hannah in 2006.