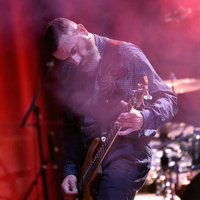 Justin Chancellor net worth: Justin Chancellor is an English musician who has a net worth of $45 million. Justin Chancellor was born in London, England in November 1971. He is best known for being the bass player in the rock band Tool. He as formerly in the band Peach and ran a music and literature store with his wife. He was playing with the band Peach who released an album and toured with Tool in England in the early 1990s. He moved to the United States to join Tool in 1995, replacing the band's original bassist Paul D'Amour who wanted to play guitar rather than bass. Justin first appeared on the band's second studio album "AEnima", in 1996. The album was certified 3x Platinum and reached #1 in New Zealand and #2 in the United States. The band's third album "Lateralus" was released in 2001 and was certified 2x Platinum. It reached #1 in the US, Australia, and Canada. The band's fourth studio album "10,000 Days" was released in 2006. It reached #1 in the US, Australia, Canada, the Netherlands, and New Zealand. Chancellor has recorded the singles "Stinkfist", "H.", "AEnema", "Forty Six & 2", "Schism", "Lateralus", "Parabola", "Vicarious", "The Pot", and "Jambi" with the band. Since he has been with Tool the band has won three Grammy Awards.

In August 2019 Tool announced that their fifth album "Fear Inoculum", their first album in 13 years, would be released on August 30, 2019.