Josh Todd net worth: Josh Todd is an American musician and actor who has a net worth of $14 million. Josh is particularly well known for having multiple tattoos on his heavily inked body. He has full sleeves, full back, etc. Joshua Todd Gruber was born in Los Angeles, California in April 1971.

He is best known as the lead singer of the band Buckcherry. Before Buckcherry Todd was the front man for the Hollywood rock band Slamhound. Eventually Todd's style moved from glam to punk. He formed the band Sparrow which later changed to Buckcherry in 1995. The band released their self-titled debut album in 1999. They have released five studio albums. The band's biggest hits are the songs "Crazy Bitch" and "Sorry". Todd was part of a project that went on to become Velvet Revolver, but he was replaced by Scott Weiland. Todd formed TODD Entertainment, LLC in 2003 and released the solo album You Made Me. He has appeared in the films The New Guy, xXx, The Salton Sea, and Eagle Eye. He has appeared in the television shows The Shield, Push, Nevada, and Bones. He is married to Mitzi Martin and the couple has two children. He was previously married to Jasmine Lawson. 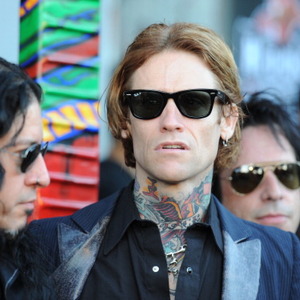