Jon Batiste net worth: Jon Batiste is an American musician, bandleader, and television personality who has a net worth of $4 million. Jon Batiste was born in Kenner, Louisiana in November 1986. He has record and performed with several artists including Stevie Wonder, Willie Nelson, Prince, Ed Sheeran, Lenny Kravitz, Ed Sheeran, and more.

Batiste plays the piano, melodica, bass, and organ. His band is called Stay Human and appears with him on The Late Show with Stephen Colbert where is the bandleader and musical director. Batiste is the Creative Director of the National Jazz Museum in Harlem, New York and the Music Director for The Atlantic. He released his debut studio album Times in New Orleans in 2005 and released the albums Live in New York: At the Rubin Museum of Art in 2006, In the Night in 2008, and The Amazing Jon Batiste! in 2011. Batiste released the album MY N.Y. EP (with Stay Human) in 2013 and it reached #1 on the US Jazz chart. He released the album The Process (with Chad Smith and Bill Laswell in 2014 and The Late Show EP (with Stay Human) in 2016. His album Christmas with Jon Batiste was released in 2016 and reached #1 on the US Heatseekers chart as did his album Hollywood Africans in 2018. 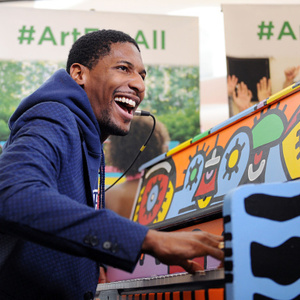