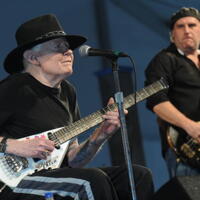 Johnny Winter Net Worth: Johnny Winter was an American musician and producer who had a net worth of $10 million dollars. Born John Dawson Winter the Third in Beaumont, Texas, in 1944, Johnny Winter and his younger brother grew up with albinism. He released his first record, "School Day Blues", with Johnny and the Jammers when he was 15 years old. In 1968, he was invited to play on stage during a concert, which led to him signing a deal with Columbia Records. A year later, he released his self-titled album, which charted at number 24 in the U.S. He toured at Woodstock, invited his brother, Edgar, to join the group, and released his follow-up effort, "Second Winter". A year later, he formed the band Johnny Winter And with Rick Derringer, Randy Jo Hobbs, and Randy Z. While with the band, Winter became hooked on heroin, and, after successfully completing treatment, returned to music in 1973. Four years later, he played with his childhood idol, Muddy Waters, and produced his albums "Hard Again", "I'm Ready", and "King Bee" with Blue Sky Records. All three albums were honored with Grammy Awards. Since 1968, Winter has released more than a dozen albums. He himself was nominated for Grammy honors, was inducted into the Blues Foundation Hall of Fame in 1988, and was considered one of the 100 greatest guitarists in history by "Rolling Stone" in 2003. Winter was found dead in his Zurich hotel room on July 16, 2014, at the age of 70. He played his last show at the Cahors Blues Festival two days before his death.