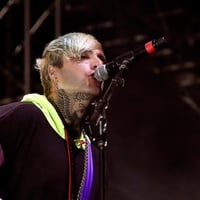 Johnny Stevens net worth: Johnny Stevens is an American singer and musician who has a net worth of $4 million. Johnny Stevens was born in Massachusetts in April 1986. He is best known for being the lead vocalist and guitar player in the rock band Highly Suspect. The band formed in 2009 and includes twin brothers Rich and Ryan Meyer. Their debut studio album Mister Asylum was released in 2015 and reached #2 on the US Hard Rock chart and well as #7 on the US Rock chart, #9 on the US Digital chart, and #56 on the Billboard Hot 100. Highly Suspect released the album The Boy Who Died Wolf in 2016 which reached #1 on the US Alternative chart and #2 on the US Rock and US Hard Rock charts. It also reached #28 on the Billboard 200 and #10 in New Zealand. Their single "Lydia" reached #4 on the US Mainstream Rock chart. The band's single "My Name Is Human" reached #1 on that chart and their single "Little One" reached #2 on the US Mainstream Rock chart. They were nominated for Grammy Awards in 2016 and 2017.