Johnny was a founding member of the Ramones and stayed with the band for its entire career. The Ramones were listed by Rolling Stone as one of the 50 Greatest Artists of All Time. They were also listed by VH1 as one of the 100 Greatest Artists of Hard Rock. They were voted the second greatest rock band behind The Beatles by Spin magazine in 2002. The Ramones released 14 studio albums. Some of their most popular songs include "Blitzkrieg Bop" and "Rock 'n' Roll High School". The band was inducted into the Rock and Roll Hall of Fame in 2002 and was awarded a Grammy Lifetime Achievement Award in 2011. Johnny was named one of Time's 10 Greatest Electric-Guitar Players in 2003 and was ranked the 16th Greatest Guitarist of All Time by Rolling Stone the same year, and #28 by Rolling Stone in 2011. Johnny also appeared in movies and documentaries such as Rock 'n' Roll High School and appeared on episodes of The Simpsons and Space Ghost Coast to Coast. Johnny Ramone passed away on September 14, 2004 at 55 years old after battling prostate cancer. An eight foot tall bronze memorial statue of Johnny was erected at the Hollywood Forever Cemetery in Los Angeles, California. He was politically active was a notable conservative and member of the Republican party. 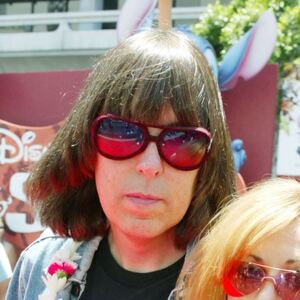