John McVie net worth: John McVie is a British bass guitar player who has a net worth of $50 million. John McVie is best known for playing with the bands John Mayall & the Bluesbreakers and Fleetwood Mac, the latter of which received far more publicity and success. It's also said that McVie's last name served as inspiration for the band's name – Mac – along with fellow member Mick Fleetwood.

McVie joined the band in 1967 at the encouragement of a former bandmate named Peter Green after the departure of temporary player, Bob Brunning. After just a year with the band, McVie married Christine Perfect, who was also a musician, having played the piano and sang blues style music for years prior. She then subsequently joined the band two years later. The couple later divorced in 1976. McVie remarried in 1978 after having met Julie Ann Reubens. Fleetwood Mac would go on to become one of the most successful bands in music history, selling hundreds of millions of records.

In 1998, McVie was honored for his music with the band by receiving an induction into the Rock and Roll Hall of Fame. In 1987 he experienced an alcohol-induced seizure, which caused him to quit drinking. This was after a long-fought battle with drinking, which is also listed as one of the causes as his split and subsequent divorce from Perfect. His daughter, Molly, was born in 1989.

Live Nation Earnings: In October 2018 we learned some of the financial inner-workings of today's Fleetwood Mac thanks to a lawsuit filed by on-again-off-again member Lindsey Buckingham. Buckingham sued his former bandmates after he was abruptly removed from the group's 2018-2019 Live Nation tour. The lawsuit claimed that according to terms of their deal with Live Nation, each band member would receive $200,000 per show over 60 shows, for a total payout of $12 million. The amount could reach as high as $14 million depending on various attendance milestones and additional dates added down the road. Three months later the lawsuit was settled for an undisclosed amount. Buckingham released a statement saying: 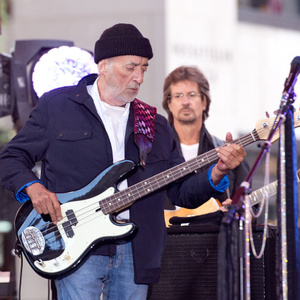