John Lydon Net Worth: John Lydon is an English singer-songwriter who has a net worth of $500 thousand. John Joseph Lydon was born in Holloway, London, England in January 1956. Lydon is better known as Johnny Rotten and was the lead singer of the Sex Pistols. Rotten fronted the punk rock band from 1978 until 1978 and then for reunions in the 1990s and 2000s.

The band's only studio album Never Mind the Bollocks, Here's the Sex Pistols was released in 1977 and hit #1 on the UK charts. Their most popular songs include "God Save the Queen", "Anarchy in the U.K. and "C'mon Everybody". The band was inducted into the Rock and Roll Hall of Fame in 2006 but refused to attend the ceremony. From 1978 to 1993 Rotten was the lead singer of the band Public Image Ltd. The band has released nine studio albums and their 1989 single "Disappointed" hit #1 on the US Alternative chart. Lydon has turned down an MBE for his contributions to music. He was named one of the 100 Greatest Britons in 2002. His autobiography Rotten: No Irish, No Blacks, No Dogs was published in 1993. He has hosted television shows in the US, UK, and Belgium. Lydon's only solo studio album Psycho's Path was released in 1997. He is married to Nora Foster. 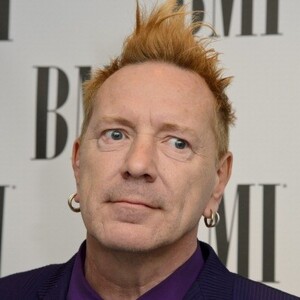