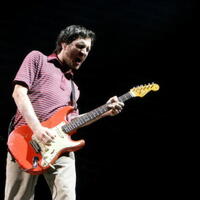 What is John Frusciante's Net Worth?

John Frusciante is an American guitarist, singer, songwriter and producer who has a net worth of $25 million. He is best known for being the guitarist of the rock band the Red Hot Chili Peppers. He has also released a dozen solo albums.

Frusciante became a big fan of a local band called Red Hot Chili Peppers when he heard them at 15 years of age. At the age of 16 Frusciante left school and home to become a full-time musician. He had even intended to audition as a guitarist for Frank Zappa but "chickened out."

Frusciante developed serious drug habits while touring with the band. Not only was Frusciante smoking large amounts of marijuana, but he was using heroin. He left the band for a time, but couldn't kick the habit on his own.

He has since recorded several more albums with the Chili Peppers including Californication (1999) and By The Way (2002), both massive commercial successes.

Frusciante was born on March 5, 1970 in New York City into a family of musicians. His father, John, is a Julliard-trained pianist while his mother, Gail, was a violinist who became a stay-at-home mom. His father was also a lawyer and the family moved to Tucson, Arizona and then Florida where his father became a judge. His parents then separated and Frusciante moved with his mother to Santa Monica, California.

After his mother remarried, the family moved to Los Angeles and Frusciante became involved in the punk rock scene. He was particularly interested in the band, The Germs, and listened to their songs on repeat. He also studied the playing style of guitarists like Jeff Beck, Jimmy Page, David Gilmour, and Jimi Hendrix, as well as Frank Zappa. At the age of 16, he decided to drop out of high school with his parents' permission after completing all the proficiency tests in order to pursue music full time. He began taking classes at the Guitar Institute of Technology though he did not complete the course.

Frusciante had also started listening to the Red Hot Chili Peppers in 1984 after his guitar instructor had auditioned to be their guitarist. He then attended one of their concerts and become a devoted fan and was particularly taken by all the guitar and bass parts performed by then guitarist Hillel Slovak.

Frusciante became friends with the former drummer of the band Dead Kennedys, D.H. Peligro, in 1988. They would often play music together and Peligro would sometimes invite his friend Flea, the bassist from Red Hot Chili Peppers. The three developed great musical chemistry.

In 1988, the Chili Peppers guitarist, Slovak, died of a heroin overdose. Drummer Jack Irons left the band shortly thereafter. The remaining band members recruited Peligro to play drums and initially got DeWayne McKnight on guitar. However, McKnight didn't connect with the group and Flea proposed auditioning Frusciante. Frusciante managed to impress the band in his audition and was offered the position of guitarist.

The newly reformed Chili Peppers then set to work on recording a new album. "Blood Sugar Sex Magik" was recorded in an old Hollywood Hills mansion where the band members isolated themselves for the duration of the recording. The album was released in 1991 and reached number three on the Billboard charts, much higher than their previously released music. The unexpected success of the album catapulted the group into rock stars. Frusciante was unprepared for this level of fame and had a hard time coping with their popularity. He eventually decided to leave the band in 1992.

Over the next three years, Frusciante fell into a deep state of depression and isolated himself at home. He had also developed a serious drug habit during his brief time touring with the Chili Peppers, which only worsened during this period. He worked on various artistic pursuits, including painting and recording solo music. He released his first solo album in 1994 called "Niandra Lades and Usually Just a T-Shirt."

In 1996, an article was published in the "New Times LA" that described Frusciante as a "skeleton covered in thin skin," which was attributed to his deepening addiction to heroin. He released another album in 1997, "Smile from the Streets You Hold," which he later admitted was released in order to get more money for drugs. 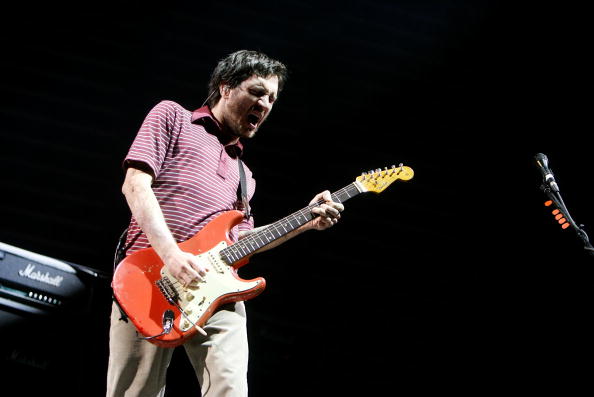 In 1998, Frusciante checked into a drug rehabilitation clinic in Pasadena after his friends urged him to do so. His health was in a deep state of decline at this point but he checked out after only a month. However, the then began living am ore ascetic and spiritual lifestyle, changing his diet and regularly practicing yoga.

He was also invited back into the Red Hot Chili Peppers after the group had fired guitarist Dave Navarro. Reunited, the band recorded the album "Californication" which was released in 1999. The album did very well and the band embarked on a tour. Frusciante also continued writing and recording solo music, releasing a third solo album in 2001. In 2002, the band released another album, "By the Way," which many consider to display a shift in Frusciante's playing to reflect a more group-minded mentality. Frusciante recorded another album with the Chili Peppers, "Stadium Arcadium," before deciding to leave the band for a second time, quitting in 2009.

After his departure, he shifted to making electronic music. He released several albums through the 2010s that were primarily electronic. He then returned again to the Chili Peppers in 2019 and performed with the band for the first time in 13 years in February of 2020.

Frusciante is considered one of the best guitarists of all time and made the "Rolling Stone" list of "100 Greatest Artists of All Time," coming in at the eighteenth spot. He has released 12 solo albums from 1994 to 2020, in addition to the albums he has released with the Red Hot Chili Peppers and collaborations with other musicians.

John was married to musician Nicole Turley from 2011 to 2015. During their divorce proceedings Nicole initially demanded $75,000 per month in alimony. A filing revealed Nicole estimated John's fortune at the time to be around $14 million.

In the early 2000s, Frusciante paid $1 million for a home in the Hollywood Hills. In April 2021 he paid $4.55 million for the 4-bedroom house next door. He will presumably create an impressive little hilltop compound.