John Dwyer net worth: John Dwyer is an American musician, singer, songwriter, record label owner, and visual artist who has a net worth of $3 million. John Dwyer was born in Providence, Rhode Island in October 1974. He is best known for being the founding member of the band Thee Oh Sees.

Dwyer has recorded solo music under the name Damaged Bug and has been a member of the bands Coachwhips, Pink and Brown as well as The Hospitals. He founded Castle Face Records in 2003. The Oh Sees have released more than 20 studio albums including 1, 2, Songs About Death & Dying Vol. 3, COS 4: Get Stoved, Memory of a Cut Off Head, The Cool Death of Island Raiders, Sucks Blood, The Master's Bedroom Is Worth Spending a Night In, Help, Dog Poison, Warm Slime, Castlemania, Carrion Crawler/The Dream, Putrifiers II, Floating Coffin, Drop, Mutilator Defeated at Last, A Weird Exits, An Odd Entrances, Orc, Smote Reverser, and Face Stabber. 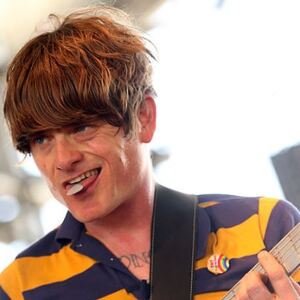