What Is Joe Satriani's Net Worth?

Joe Satriani is an American guitar player who has a net worth of $12 million. Joe Satriani earned his net worth as a musician, guitar instructor, songwriter and producer. Satriani has also toured with Deep Purple and founded the G3 tour in 1995. He is the lead guitar player for the band Chickenfoot that also features Sammy Hagar.

He has his own series of guitars with Ibanez, as well as a series of pedals with Vox, and an amplifier with Marshall Amplification. He has released 17 studio albums and has been nominated for 15 Grammy Awards. He cites his influences as Hendrix, Eric Clapton, Jimmy Page, and Jeff Beck among others. Satriani has sold more than 10 million albums.

Joseph Satriani was born in Westbury, New York on July 15, 1956. He was inspired by the death of Jimi Hendrix to start playing guitar at age 14, when he heard the news during football practice. As legend has it, he told his coach right then and there that he was quitting football to become a guitarist.

He was raised Roman Catholic and is of Italian descent, with his paternal grandparents hailing from Bobbio and Piacenza, and his grandparents on his mother's side from Bari.

He studied under jazz guitarist Billy Bauer and jazz pianist Lennie Tristano in 1974. Joe started teaching guitar and his students include Steve Vai. While teaching Vai, Joe studied music at Five Towns College. Satriani moved to Berkeley, CA and taught guitarists from the bands Metallica, Counting Crows, Third Eye Blind, and Primus. Satriani joined a band in San Francisco called Squares and was later invited to join the Greg Kihn Band. Due to his work with the Greg Kihn Band, Satriani was able to pay off his crushing credit card debt he incurred while recording his first album "Not of This Earth," which he released in 1986. Later that year, Joe sang backup vocals for Crowded House's first album.

He released a second album in 1987, "Surfing with the Alien." This album produced a few radio hits and was the first all-instrumental album to chart high in several years. He was recruited by Mick Jagger to play lead guitar on Jagger's first solo tour in 1988 and also released the EP called "Dreaming #11." In 1989, he released the album "Flying in a Blue Dream," inspired by the death of his father who passed away during the making of the album. 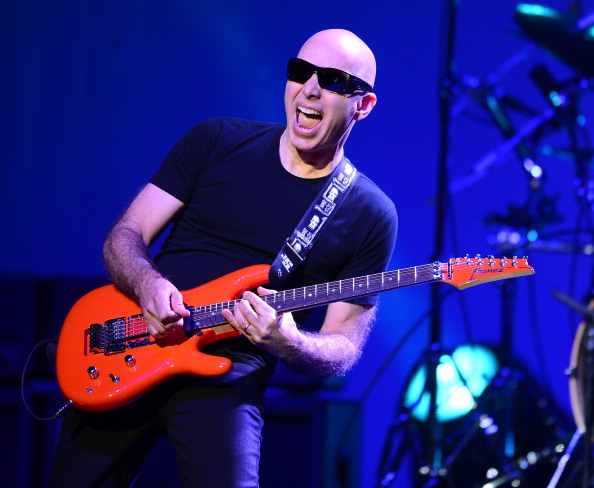 Satriani released "The Extremist" in 1992, which remains his most commercially successful album to date. His single "Summer Song" received major airplay in the U.S. and got a massive boost in popularity when it was used in a Sony commercial for their Discman portable CD players. He joined the band Deep Purple in 1993 as a temporary replacement for guitarist Ritchie Blackmore during their tour in Japan. After a successful tour, Satriani was invited to join the band permanently but he declined, as he had just signed a multi-album solo deal with Sony. He founded G3 in 1996, a concert tour that included a rotating trio of guitarists. Satriani released two more albums in 1998, "Crystal Planet" and "Engines of Creation." He recorded two live shows in December 2000 and released them as both a live album and a DVD titled "Live in San Francisco."

In 2002 he released "Strange Beautiful Music" and in 2004 he released "Is There Love in Space?" The musician embarked upon his first tour of India in May 2005 and recorded and released another two-disc live album the following year, "Super Colossal" and "Satriani Live!" Epic Records re-released "Surfing with the Alien" in August 2007. Satriani released his next album "Professor Satchafunkilus and the Musterion of Rock" on April 1, 2008. The following month, he joined the hard rock group Chickenfoot with the infamous Sammy Hagar, as well as Chad Smith of Red Hot Chili Pepper drumming fame. The group released their first album in June 2009 and released a second album in September 2011.

Joe released his 13th studio album "Black Swans and the Wormhole Wizards" in October 2010. His next album was released in May 2013 under the title "Unstoppable Momentum." July 2015 saw the release of his next album "Shockwave Supernova." Joe released his 16th studio album "What Happens Next" and his next solo record "Shapeshifting" was released in April 2020. Satriani continues to play, tour, record, and collaborate with some of the biggest names in the music world.

He is an official supporter of the nonprofit organization Little Kids Rock, which provides free musical instruments and lessons to kids in underserved public schools in the United States. Satriani has even personally delivered instruments to children in the program.

Satriani filed a lawsuit against Coldplay for copyright infringement in December 2008. The artist claimed that the Coldplay song "Viva la Vida" borrowed heavily from Satriani's song "If I Could Fly," from his album "Is There Love in Space?". "Viva la Vida" received two Grammys that year, including for Song of the Year. Coldplay denied the plagiarism allegation but a settlement (unspecified) was eventually reached between the two.


Joe has been married to his wife Rubina Satriani since 1981. The two have one child, a son named Zachariah Zane Satriani (Z. Z. Satriani) who occasionally tours with his father. The family still resides in San Francisco, California. 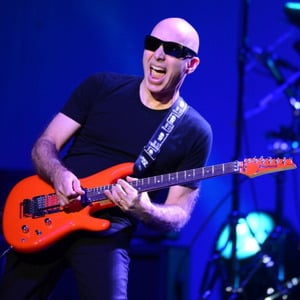