How much is Joe Elliott Worth?

Joe Elliot net worth: Joe Elliott is a British singer-songwriter and musician who has a net worth of $70 million dollars. Joe Elliott was born in Sheffield, South Yorkshire, England in August 1959. He best known as the lead vocalist for the band Def Leppard. He became the lead vocalist for the band Atomic Mass. The band changed their name to Def Leppard. In addition to singing he provides rhythm guitar and sometimes drums, piano, and electronic keyboards. The band formed in 1977 and was part of the New Wave of British Heavy Metal movement. Their single "Bringin' On the Heartbreak" was one of the first rock videos that was played on MTV. The band's 1983 album was ranked #384 on Rolling Stone's 500 Great Albums of All Time. Their 1987 album Hysteria hit #1 in the U.S. and the U.K. The album has sold more than 20 million copies and was certified 12x Platinum. Their album Adrenalize also hit #1 in the U.S. and the U.K. All together the band has sold over 100 million records worldwide. They have sold 10 million copies of two albums in the U.S. becoming one of five bands to do so. Elliott has also been the lead singer for the Cybernauts, a David Bowie tribute band, and Down 'n' Outz, a Mott the Hoople cover band. In 2012 he joined the super group Kings of Chaos. 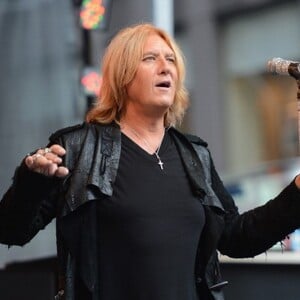