Joe Don Rooney net worth: Joe Don Rooney is an American musician who has a net worth of $60 million dollars. Joe Don Rooney was born in Baxter Springs, Kansas in September 1975. He is best known as the lead guitarist for the country group Rascal Flatts. In 1992 he formed the band UncleThumbtack with friends.

Rooney is the lead guitar player and harmony singer for Rascal Flatts which formed in 1999. The group has released nine studio albums and have had 26 singles reach the Top 20 on the Billboard Hot Country Songs chart. Some of their hits include "Bless the Broken Road", "What Hurts the Most", and "My Wish". The group won a Grammy Award and countless other awards including Academy of Country Music, Country Music Association, Billboard Awards, and People's Choice. In 2012 the band received a star on the Hollywood Walk of Fame. He married former Miss Georgia USA, Miss USA 2nd runner-up, and Playmate of the Year Tiffany Fallon in 2006. They have two children. 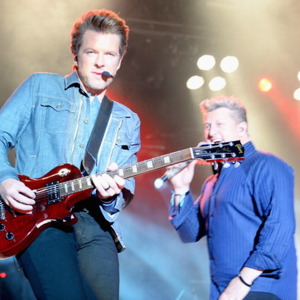