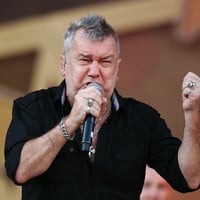 Jimmy Barnes net worth: Jimmy Barnes is an Australian music icon who has a net worth of $20 million. Born in Glasgow, Scotland, Jimmy Barnes, also known as James Dixon Swan, began to make a name for himself as a musician, performing with the Australia-based band, Cold Chisel. After the band moved multiple times, and went through some strife within the group, they signed with WEA in the late 70s. By 1980, they were immensely popular, but by 1983 personal and professional tensions caused the group to split up. Their farewell concert tour still stands as the highest grossing tour in Australian history. He then launched a very successful solo career, with his first six albums debuting at the top of the Australian charts. After a low period in the mid-90s, he regained his spot on top of the charts in the early 2000s, re-teaming with the original line-up of Cold Chisel, and releasing a greatest hits album and new solo work.