How much is Jimmie Vaughan Worth?

Jimmie Vaughan net worth: Jimmie Vaughan is an American blues/rock guitarist and singer who has a net worth of $1.5 million. He is the older brother of the late Texas blues guitar legend, Stevie Ray Vaughan, and was a member of the music group, The Fabulous Thunderbirds from 1976-1989. He was born on March 20, 1951 in Dallas, Texas. At the age of 15, Vaughan started his first band called The Swinging Pendulums, and when he hit 16, started playing with The Chessman who became one of the area's top musical attractions. Vaughan moved to Austin in the late 1960s and began playing with musicians like Paul Ray, WC Clark, and eventually started opening concerts for Jimi Hendrix. Vaughan recorded eight albums with The Fabulous Thunderbirds and left the group in 1990 to join his brother Stevie in recording the album, Family Style. Later that year, just a few weeks prior to the albums release, Stevie Ray Vaughan died in a helicopter crash in Wisconsin, which devastated Jimmie causing him to retreat from touring and recording. In 1993, his friend Eric Clapton encouraged him to open a series of 16 special concerts at London's Royal Albert Hall, which catapulted him back into music. His next album, Out There, was recorded in 1998 and he began to emerge as an artist in his own right. He has continued to achieve success and acclaim over the last few decades and is still touring and releasing albums. Vaughan has been married twice and has twin daughters with his second wife, Robin. The family currently lives in Austin, Texas. 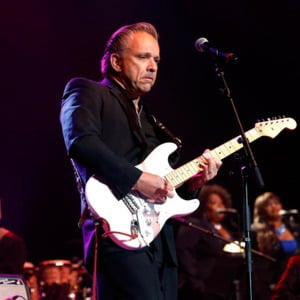