Jimi Hendrix Net Worth: Jimi Hendrix was an American musician and songwriter who had a net worth of just $20,000 at the time of his death, which is the same as around $150,000 today after adjusting for inflation. Jimi Hendrix is internationally recognized as being among the best and most influential electric guitarists in the history of music. He achieved major success playing with the band the Jimi Hendrix Experience, and earned widespread attention for his performance at the Monterey Pop Festival in 1967. In 1970, following headlining gigs at the Woodstock and Isle of Wight Festivals, he passed away from accidental drug-induced asphyxia at the age of 27.

Estate: He died without a will so his entire estate was inherited by his father Al Hendrix. The estate provided a modest income for Al from 1970 to 1974 until a formerly-trusted family lawyer convinced him to sell everything connected to Jimi for a relatively small (undisclosed) amount. Al would later sue the lawyer to retain control of the estate, citing conflicts of interest because the lawyer also owned an interest in the company Al was convinced to sell to back in 1974. By 1994 Jimi Hendrix's estate was worth $80 million. Today his estate is worth $175 million.

Early Life and Career Beginnings: Jimi Hendrix was born as Johnny Hendrix in 1942 in Seattle, Washington, the first of five children of Lucille and Al. His mixed genealogy included Cherokee, African-American, and Irish ancestors. As a very young child, Hendrix's father was stationed in Alabama with the US Army, and was placed in a stockade to prevent him from going AWOL to see his son. After returning from service, Hendrix's father was unable to find steady work, leaving the family impoverished; moreover, both of his parents struggled with alcohol, which often led to violence. Hendrix was in and out of foster care with his brother Leon, while his three other siblings, Joseph, Kathy, and Pamela, were all given up to foster care and adoption by their parents. After his parents divorced when he was nine, Hendrix was taken into custody by his father.

Hendrix went to Washington Junior High School, and then Garfield High School. In 1958, at the age of 15, he obtained his first acoustic guitar, and began playing for hours every day. Subsequently, Hendrix formed his first band, the Velvetones, and later joined the Rocking Kings.

Military Service: Discovered riding in stolen cars on more than one occasion, Hendrix was given the choice to go to prison or join the US Army. He chose the latter, and enlisted in 1961, when he was assigned to the 101st Airborne Division. However, due to his poor personal conduct, which included neglecting his duties in favor of his guitar, Hendrix was discharged in 1962.

First Performances and Recordings: Following his discharge, Hendrix moved with fellow discharged serviceman Billy Cox to Clarksville, Tennessee, where they formed the band the King Kasuals. Playing low-paying gigs at first, they eventually moved up to Nashville's Jefferson Street, earning a brief residency at a popular local venue. Subsequently, Hendrix made a living performing on the chitlin' circuit, while serving as a backing musician to such major artists as Sam Cooke, Jackie Wilson, and Ike & Tina Turner. Later, in 1964, he played the Harlem club circuit and sat in with numerous backing bands, including one for the Isley Brothers.

With the Isley Brothers, Hendrix recorded the two-part single "Testify." After leaving the band, he joined Little Richard's touring band, the Upsetters. In 1965, Hendrix signed his first recording contract, and joined the R&B band Curtis Knight and the Squires, with which he recorded the single "How Would You Feel." However, feeling constrained as an R&B sideman, Hendrix moved to Greenwich Village in 1966. There, he formed the band Jimmy James and the Blue Flames.

The Jimi Hendrix Experience: In September of 1966, Hendrix was brought to London by former Animals musician Chas Chandler, who was interested in managing and producing artists. Chandler subsequently formed the Jimi Hendrix Experience, which included Hendrix, guitarist Noel Redding, and drummer Mitch Mitchell. Within a matter of months, the band had three UK top 10 hits with the tracks "Hey Joe," "Purple Haze," and "The Wind Cries Mary." The Jimi Hendrix Experience then released the 1967 album "Are You Experienced," which spent 33 weeks on the UK charts, and peaked at number five on the Billboard 200. 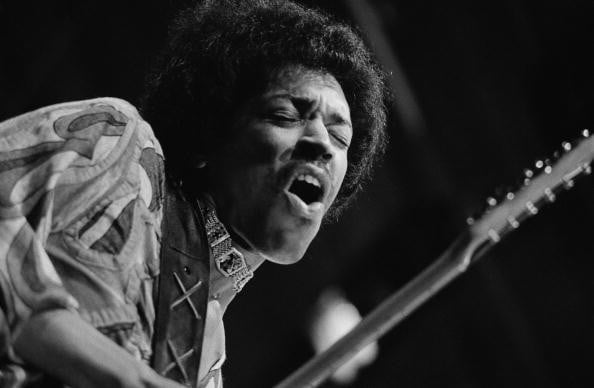 Monterey Pop and US Fame: Although the Jimi Hendrix Experience was popular in Europe, the band had not yet reached the same level of fame in the United States. This changed in June of 1967, when the group performed at the Monterey Pop Festival in California. Memorably, the Experience ended the set with Hendrix destroying his guitar and lighting it on fire, creating one of the most iconic images in rock history.

The Experience went on to release the album "Axis: Bold as Love," which made it to number five in the UK and number three in the US. This was followed by "Electric Ladyland," the band's final album; it was Hendrix's most commercially successful album, making it all the way to number one in the US. Becoming the highest-paid rock musician in the world by 1969, Hendrix headlined the Woodstock Music and Art Fair in New York. There, his guitar-driven rendition of "The Star-Spangled Banner" became one of rock's most famous performances.

Relationships: As a young adult, Hendrix dated Betty Jean Morgan. Later, when he moved into Harlem's Hotel Theresa in 1964, he met girlfriend Lithofayne Pridgon, who provided him with shelter and support. In the late-60s, he dated Kathy Etchingham and Carmen Borrero, the latter of whom he assaulted in a domestic violence incident. Hendrix's last girlfriend was Monika Dannemann, who was with him when he passed.

Substance Abuse and Death: Hendrix's fame in the late-60s was accompanied by excessive drug use. The artist was a regular user of marijuana, LSD, and amphetamines, especially when he was on tour. He also mixed the drugs with alcohol, frequently becoming aggressive and violent against people he was with.

In September of 1970, Monika Dannemann woke up to a breathing but unconscious Hendrix. After he was transported to St Mary Abbot's Hospital, Hendrix was pronounced dead. A post-mortem examination revealed that he had died of accidental asphyxia while intoxicated with barbiturates and an overdose of sleeping pills.

Honors: Throughout both his career and after his death, Hendrix garnered numerous music accolades. In 1968, Billboard named him the Artist of the Year, while Rolling Stone called him the Performer of the Year. The Jimi Hendrix Experience was inducted into the Rock and Roll Hall of Fame in 1992, and during the late 90s and early 2000s, many posthumous Hall of Fame Grammy Awards were given to Hendrix's music. Additionally, Rolling Stone ranked Hendrix as the greatest guitarist and the sixth greatest artist of all time. 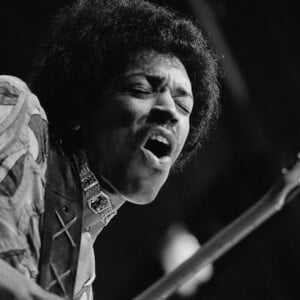