Jim Root net worth: Jim Root is an American musician who has a net worth of $9 million dollars. Born in Las Vegas, Nevada on October 2, 1971, Root is best known for playing guitar in the heavy metal group known as Slipknot. Many have also referred to Root as #4, The Peach, Mr. Bigs, The Jester, Stuperbee, and The Paint Face.

He is fluent in guitar, bass, keyboards, drums, and other percussion and has been active in the music industry since 1991. He is affiliated with record labels such as Roadrunner and Nuclear Blast, as well as the bands Slipknot, Stone Sour, Anal Blast, Atomic Opera, Deadfront, and John 5. He has a signature Fender Telecaster as well as a signature Stratocaster to his name, and he also notably plays a Flathead guitar with EMG 81/60 pickups. Before joining Slipknot, Root was a busboy, waiter, and screen printer. He replaced the band's original guitarist, Josh Brainard, in 1999 and is now considered to be one of the band's main songwriters. Root left Stone Sour in May 2014 and he is currently performing solely with Slipknot. He has recorded ten albums with Slipknot and seven with Stone Sour.He is currently dating Cristina Scabbia from Lacuna Coil, and he owns a home in Atlantic Beach, Florida. 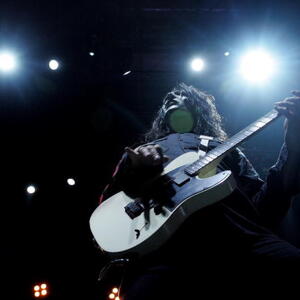