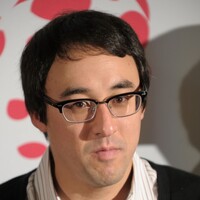 Jeff Schroeder Net Worth: Jeff Schroeder is an American rock musician who has a net worth of $5 million. Jeff Schroeder was born in Silverlake, California in February 1974. He started taking guitar lessons at 12 years old and joined the band The Violet Burning at 18. Jeff later became the guitarist and a founding member of the band The Lassie Foundation. The Lassie Foundation's debut studio album Pacifico was released in 1999 and the band recorded four albums. Schroeder joined the Smashing Pumpkins in 2007 replacing James Iha. In 2010 Schroeder was the only member of the band besides front man Billy Corgan to still be with the band since their 2007 revival. Jeff cites his guitar influences as Ace Frehley, Pete Townshend, Jeff Beck, and more. He is part Korean and is working on his PhD in comparative literature at the University of California Los Angeles. As of 2014 the only members of Smashing Pumpkins are Corgan and Schroeder. As a part of the band Jeff has been featured on the albums Zeitgeist, Teargarden by Kaleidyscope, Oceania, Monuments to an Elegy, and the upcoming 2015 album Day for Night.