How much is Jeff Hanneman Worth?

Jeff Hanneman is an American musician who has a net worth of $14 million. Jeff Hanneman has earned his net worth as the rhythm/lead guitarist as well as the founding member of the American thrash metal band Slayer. Hanneman was born on January 31, 1964 in Oakland, California and he was raised in Long Beach. He was born into a family of war veterans, his father fought in Normandy during World War II, his brothers fought in the Vietnam War. His interest and upbringing lead to his lyrics in the song "Angel of Death". Growing up his was heavily influenced by punk music as well as the war talk throughout his family which led to hits such as "Raining Blood", "War Ensemble" "South of Heaven" and "Seasons in Abyss". Jeff uses his own signature guitar, called the ESP Jeff Hanneman Signature model. He married Kathryn in 1997 the couple do not have any children and currently live in Los Angeles, Jeff along with the vocalist/bassist for the Slayer band Tom Araya are recovered addicts from cocaine and pill abuse. Hanneman is a long-time football enthusiast and fan of the Oakland Raiders. Hanneman's interest in German war medals and Nazi Germany is portrayed in many of his lyrics he is also a collector of war artifacts. He purchased a Knight's Cross medal which he bought from a fan member of the band for $1,000. The lyrics in Slayer's song "Angel of Death" led the band being accused as being Nazi sympathizers; Hanneman is the writer of most of the band's most popular songs. Jeff Hanneman died May 2, 2013. 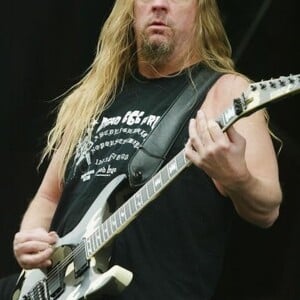