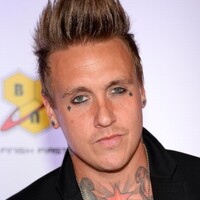 Jacoby Shaddix Net Worth: Jacoby Shaddix is an American songwriter and lead singer for the rock band Papa Roach who has a net worth of $12 million dollars. Jacoby Shaddix was born July 28, 1976 in Mariposa, California where he attended Vacaville High School and played the clarinet in the school orchestra. Shaddix and Dave Buckner founded Papa Roach in 1993. Shaddix started out playing drums but found quickly that Dave was much better than him. Shaddix then decided to pick up bass to play a part in a band but his bass was stolen. After this he defaulted to singing. While 17, Shaddix started to work as a dishwasher to be able to finance his apartment with a friend. He then became to a janitor in a hospital quitting to focus completely on Papa Roach in 1999. The band's name Papa Roach, is inspired by Shaddix' step-grandfather, Howard William Roatch, who went by the nickname 'Papa Roach'. Before releasing their major label debut album "Infest", Papa Roach recorded and published an EP in 1994 entitled 'Potatoes For Christmas'. In 1997, their first full-length album, "Old Friends from Young Years", was released. On July 19, 1997, Shaddix married his high-school sweetheart, Kelly Michelle Shaddix, with whom he has three sons, and he regularly brings his family on tour with Papa Roach.