Jack Bruce Net Worth: Jack Bruce was a Scottish musician who had a net worth of $20 million at the time of his death. Born in Bishopbriggs, Lanarkshire, Scotland, in 1943, Jack Bruce studied music at the Royal Scottish Academy of Music and Drama, but he left school after his instructors didn't want him playing jazz. Bruce went on tour in Italy and joined the group Blues Incorporated during the early '60s. He joined Manfred Mann, then formed the group Cream with Eric Clapton and Ginger Baker in the mid-'60s. Bruce also pursued his solo career, releasing his debut, "Songs for a Tailor", in 1969. He has released more than a dozen solo studio albums between 1969 and 2014, including 1970's "Things We Like", 1974's "Out of the Storm", 1980's "I've Always Wanted To Do This", 1990's "A Question of Time", 2001's "Shadows in the Air", and 2003's "More Jack than God". Though best known for his work with Cream, Bruce's other associated acts include the Graham Bond Organization, West, Bruce & Laing, Ringo Starr & His All-Starr Band, BBM, Gary Moore, and Kip Hanrahan. Bruce is thought of as one of the best jazz bassists in history. He married Janet Godfrey, the secretary for the Graham Bond Organization band. She co-wrote several songs for Cream, including "Sweet Wine". Bruce and Godfrey divorced in 1980. 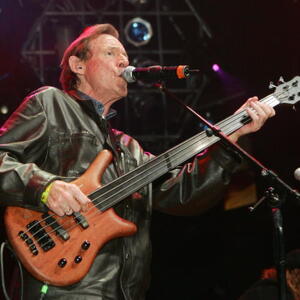