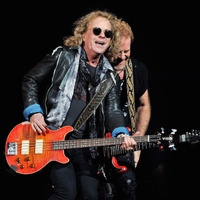 Jack Blades net worth: Jack Blades is an American musician who has a net worth of $5 million. Jack Blades was born in Palm Desert, California in April 1954. He has been a member of several bands including Rubicon, Nigh Ranger, and Damn Yankees. Blades has also played with Tommy Shaw and the Shaw Blades as well as Tak Matsumoto Group and Revolution Saints. As a solo artist he released the albums Jack Blades in 2004 and Rock 'N' Roll Ride in 2012. Blades was featured on the Rubicon albums Rubicon and America Dreams. He played on the Night Ranger albums Dawn Patrol, Midnight Madness, Seven Wishes, Big Life, Man in Motion, Neverland, Seven, Hole in the Sun, Somewhere in California, High Road, and Don't Let Up. Blades played on the Damn Yankees albums Damn Yankees and Don't Treat and the Shaw-Blades albums Hallucination and Influence. He also played on the Tak Matsumoto Group album TMG I and the Revolution Saints albums Revolution Saints and Light in the Dark.