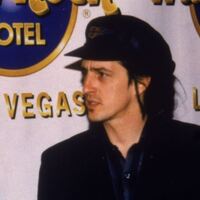 Izzy Stradlin net worth: Izzy Stradlin is an American rock musician who has a net worth of $28 million dollars. Born in Lafayette, Indiana, Izzy Stradlin, also known as Jeffrey Dean Isbell, began playing music while in elementary school, influenced by his grandmother, who was a drummer for a swing band. He began with percussion, but after moving to Los Angeles, and performing with a few bands, switched to bass and rhythm guitar. He formed the group, Hollywood Rose, with high school friend Axl Rose in the early 80s. They released a demo, then went their separate ways, but chose to regroup a few months later. In 1985, they added new members to the group and became known as Guns N' Roses. The band would go on to sell 25 million copies of their debut album, and to subsequently become the only band to ever hold the #1 and #2 positions for album sales at the same time, when they released their two-part sophomore album. The group ran into interpersonal issues and drug problems and after regrouping as a sober band, toured extensively throughout the early 90s. Izzy Stradlin left the group to pursue a successful solo career in 1992.