How much is Isaac Brock Worth?

Isaac Brock net worth: Isaac Brock is an American musician and singer who has a net worth of $6 million. Born July 9, 1975 in Helena, Montana, Isaac Brock is most widely known as the lead singer, guitarist, banjo player and songwriter for the indie rock band Modest Mouse, as well as his side project band, Ugly Casanova. His lyrics are known for their frequent use of metaphors and philosophic flavor as well of oppressive rural themes and phrases common to early blue collar environments. Though many of his songs seem religion-based, Brock describes himself as not really being religious at all. Interestingly, when he was a boy, he was raised in a Christian religious sect called the Grace Gospel Church, an affiliate of the Branch Davidians (a cult-like environment that eventually erupted in Waco, Texas in 1993 and ended in the deaths of 82 Branch Davidian men, women and children, four ATF agents and Davidian leader David Koresh during a standoff between Koresh and law enforcement). Brock is also a former A&R man for the record label Sub Pop. In March 1999, a 19-year-old woman filed a police report accusing Brock of rape. Charges were never formerly pressed and Brock maintains his innocence in the rape accusation and in an interview with The A.V. Club he stated, "…It was utter and complete bullshit…" 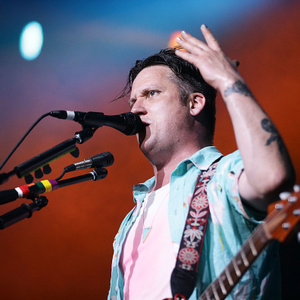