What is Ian Anderson's net worth?

Ian Anderson (MBE), The Most Excellent Order of the British Empire is a Scottish singer, songwriter, multi-instrumentalist and businessman who has a net worth of $100 million. Ian Anderson is best-known for being the leader and flutist of Jethro Tull. While Ian has been the front man for the Jethro Tull band for 44 years. He has also had a very successful solo career. With Jethro Tull alone, Ian has sold more than 60 million albums worldwide. Outside of music Ian has invested in a number of businesses and real estate ventures.

Ian Anderson was born on August 10, 1947 in Dunfermline, Fife, Scotland. His father, James Anderson, ran the RSA Boiler Fluid Company in East Port; he spent his youngest years in Edinburgh, Scotland. The family moved to Blackpool, England, in 1959 and Ian attended Blackpool Grammar School. As a teenager he had a job as a sales assistant at Lewis' department store in Blackpool then later as a vendor at a newsstand. He studied fine art at Blackpool College of Art from 1964-1966.

In 1963 Ian Anderson formed a band called The Blades with some of his school pals. Anderson was a vocalist and harmonica player in this soul and blues band. Among the band members were John Evan, Jeffrey Hammon, and Barriemore Barlow, who would go on to make up Jethro Tull. They played their first show at the Holy Family Church Hall in North Shore, England. They eventually moved to London and based themselves in Luton. In late 1967, Anderson was holding down a day job cleaning the Ritz Cinema in Luton. It was during this time that Anderson abandoned his ambition of playing electric guitar and traded it in for a flute.

He had only been playing the flute for a few months when they recorded their first album. Their debut album , "This Was" was released in 1968 to favorable reviews and modest commercial success. The band first achieved real success in 1969 when they released the folk-tinged electric blues album "Stand Up." It reached No. 1 in the UK and they toured extensively in the UK and the U.S. Their musical style shifted in the direction of progressive rock throughout the '70s. 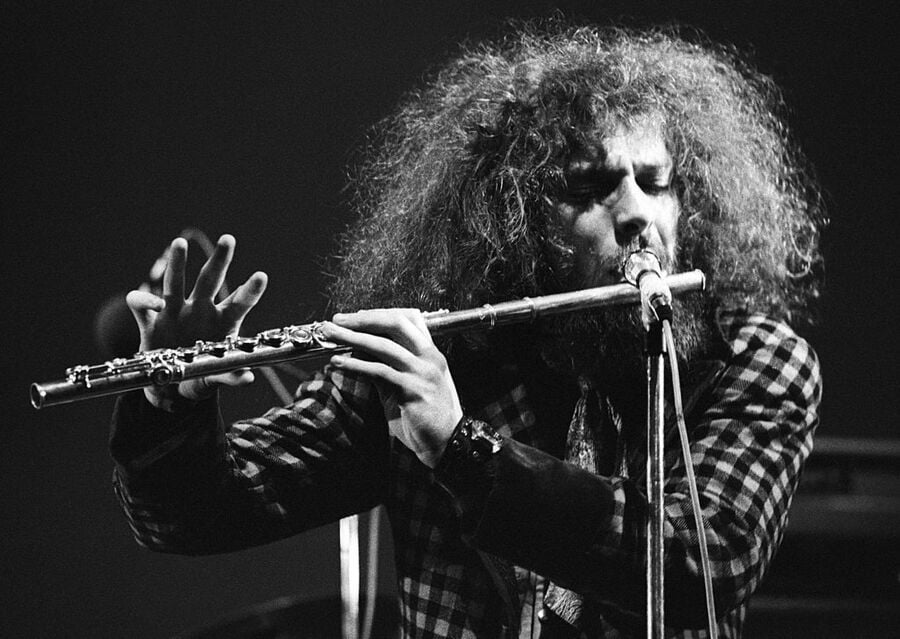 Anderson was already aiming to start a solo career in 1980 when Jethro Tull decided to take a break after the death of fellow band member John Glascock. Anderson released his first album in 1983, "Walk into the Light." Meanwhile, Jethro Tull reunited and resume making albums and touring. In the '90s, Anderson began experimenting with bamboo flutes. He released his second solo album, the instrumental "Divinities: Twelve Dances with God", in 1995. In 2003, Anderson released a composition called "Griminelli's Lament." In 2011, Jethrow ceased touring and Anderson released a new album in 2014, "Homo Erraticus." It peaked at No. 14 in the UK, making it his most successful ever solo album.

Anderson has released six studio albums and 2 live albums as a solo artist. The reformed Jethro Tull is now billed as "Ian Anderson and the Jethro Tull band" and still performs live. They canceled 2020 tour dates due to the COVID-19 global pandemic and have announced tour dates into 2021.

Jethro Tull is estimated to have sold 60 million albums worldwide, with 11 gold and five platinum albums. In total, they have released 21 studio albums and 9 live albums.

Anderson produced Steeleye Span's 1974 album "Now We Are Six." In 1984, Anderson recorded the album "A Classic Case" with the London Symphony Orchestra along with Martin Barre, Dave Pegg, and Peter-john Vettese. The group performed a selection of music from Jethro Tull. He appeared on the song "All Along You Knew" from Honeymoon Suite's 1985 album "The Big Prize." Anderson was a DJ on radio station Planet Rock and presented his own two-hour show "Under the Influence." Anderson played flute on the Men Without Hats song "On Tuesday" from their album "Pop Goes the World" in 1987. He also played flute on the 1988 Roy Harper album "The Dream Society." In 2001, he appeared in two Uriah Heep live albums. In 2005, Anderson played flute and sang lead vocals on a version of "The Thin Ice" for the 2005 album "Back Against the Wall", an all-star tribute covering Pink Floyd's "The Wall" in its entirety. Anderson performed a flute duet with astronaut Cady Coleman during her mission aboard the International Space Station in honor of the 50th anniversary of the first manned spaceflight by Yuri Gargarin. 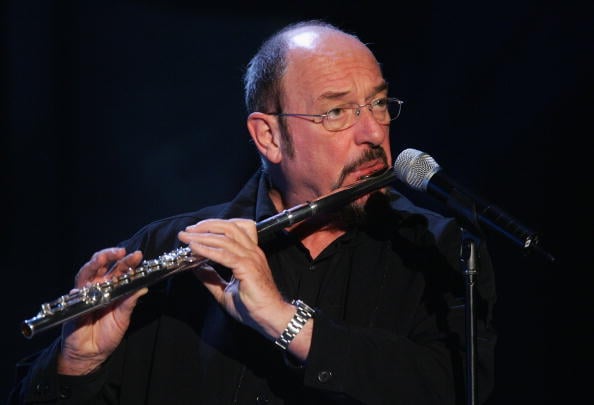 Jethro Tull won its only Grammy Award with the 1987 album "Crest of a Knave." In 1973, Jethro Rull appeared on the cover of Time magazine. Anderson received two honors in 2006–the Ivor Novello Award for International Achievement and an honorary Doctorate of Literature at Heriot-Watt University. Anderson was appointed Member of the Order of the British Empire in the 2008 New Year Honours for services to music. In 2011, he was awarded an Honorary Doctorate (Doctor of Letters) from Abertay University. Anderson was presented with the "Prog God" award at the 2013 Progressive Music Awards.

From 1970-1974, Anderson was married to photographer Jennie Franks, who wrote many of the lyrics for the Jethro Tull song "Aqualung," arguably their most famous song.

He has been married to Shona Learoyd since 1976 and they have two children, James Duncan Anderson who is also a musician, and Gael Anderson who works in the film industry. In 2006 Gael married The Walking Dead star Andrew Lincoln.

Anderson is a survivor of deep vein thrombosis; he works to raise awareness of the disease by appearing in public service announcements. In May 2020, he revealed in a video interview for The Big Interview with Dan Rather that he suffers from the incurable chronic obstructive pulmonary disease (COPD). In addition to his music career, he is an avid businessman and owns and operates several salmon farms in New England.

Real Estate and Other Ventures

One of the first properties Ian bought was a a home in the Regent's Park area of London. He paid 90,000 pounds in the 1970s. He sold the property after just two years for a 20,000 pound loss.

In 1978 Ian paid 150,000 pounds for a 50,000-acre estate called Straithaird on the Isle of Skye. He soon launched and ran a fish farm on the property. He then invested in nine more fish farms on the island. At this peak Ian's fish business employed 400 people and earned north of 10 million pounds per year in revenue, though he would later admit the cost-heavy business made it not very profitable at the end of the day. He sold Straithaird in 1994 for 1 million pounds. With all the improvement and upkeep costs he would later claim to have "not made a bean of profit" during his time owning Straithaird.

Upon selling Straithard, Ian and his wife Shona bought a 12-acre estate in Wiltshire, England, not far from Stonehenge. Today their property in Wiltshire spans 400 acres.

They also own a home in Montreux, Switzerland.