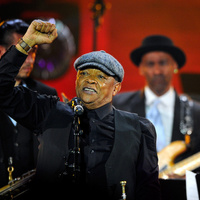 Hugh Masekela net worth: Hugh Masekela was a South African musician, singer, and composer who had a net worth of $1.5 million. Hugh Masekela was born in Witbank, South Africa in April 1939. He is the father of American television host Sal Masekela. Hugh Masekela plays trumpet, flugelhorn, trombone, and cornet. He started to play the piano and sing at an early age and took up the trumpet at 14. He played for the Huddleston Jazz Band and joined Alfred Herbert's African Jazz Revue. His debut album Trumpet Africaine was released in 1962 on Mercury Records and he has released numerous records through 2012. In 1968 Masekela was nominated for a Grammy Award for Best Contemporary Pop Performance – Instrumental for Grazin' in the Grass. In 2010 Hugh and his son Salema were featured in a series of videos on ESPN tilted Umlando – Through My Father's Eyes during the FIFA World Cup in South Africa. In 2013 he joined the Dave Matthews Band on trumpet in South Africa. Masekela serves as a director on the board for the non-profit organization the Lunchbox Fund. Hugh Masekela died on January 23, 2018 at the age of 78.