Hilton Valentine Net Worth: Hilton Valentine was an English musician who had a net worth of $1 million at the time of his death. He was best known has being the original guitarist for the band The Animals. Hilton died on January 29, 2021 at the age of 77.

Hilton Valentine was born in North Shields, Northumberland, England, UK in May 1943. He received his first guitar from his mother at age 13 and learned from a chord book. He started his own skiffle group called the Heppers which evolved into the Wildcats. He was asked to join the Alan Price Combo which changed their name to the Animals. Valentine is credited with the electric guitar arpeggio in the introduction to the song "The House of the Rising Sun" by the Animals in 1964. He played and recorded with the Animals until the first incarnation of the band dissolved in 1966. During that era the band also recorded the hits "I'm Crying", "Don't Let Me Be Misunderstood", "We Gotta Get out of This Place", and "It's My Life". The original band lineup had some comebacks in the 1970s and 1970s. In 1994 the Animals were inducted into the Rock and Roll Hall of Fame. Valentine recorded a solo album All In Your Head. He has toured with his Skiffledog solo project and Eric Burdon. He released the album Skiffledog on Coburg Street in 2011. 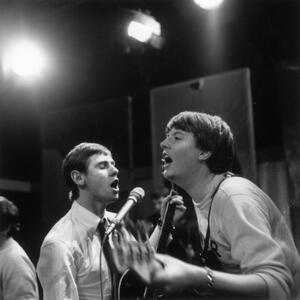