H.P. Baxxter net worth: H.P. Baxxter is a German musician and singer who has a net worth of $50 million. H.P. Baxxter was born in Leer, Germany in March 1964. Baxxter is the front man of the techno group Scooter which he founded with his friend Rick J.

Jordan in 1993. The two founded the band Celebrate the Nun in 1985 and had hits with the singles "Will You Be There" and "She's a Secretary". German dance group Scooter has sold more than 30 million records and have over 80 gold and platinum awards. With 23 Top 10 hits they are considered the most successful German single record act. Their debut album …And the Beat Goes On! was released in 1995 and Scooter has released a total of 17 albums. Their most popular singles include "Hyper Hyper", "Move Your Ass!", "Ramp! (The Logical Song)", "How Much Is The Fish?", "Nessaja", "Maria (I Like It Loud)", "Weekend", and "The Question Is What Is the Question?".  From 1993 to 1998 H.P. was also part of the remix team known as The Loop. Baxxter was part of the German jury for the 2009 Eurovision Song Contest and was the official German representative at the 2010 IIHL World Championship. In 2012 he served as a judge on the German X Factor. Baxxter is an automotive enthusiast and owns and collects old British cars. 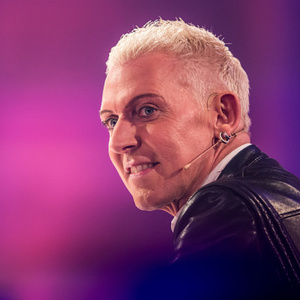