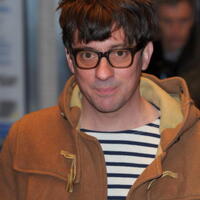 Graham Coxon Net Worth: Graham Coxon is an English musician, singer-songwriter, and painter who has a net worth of $15 million. Graham Leslie Coxon was born in Rinteln, West Germany in March 1969. He is known for being a member of the band Blur as well as his solo work. He studied at Goldsmiths College, London where he met other musicians and joined the band Seymour which changed to Blur. Coxon became the lead guitarist and background vocalist for the band, occasionally playing drums or providing lead vocals. In 2001 he was admitted to a hospital for alcoholism and received treatment. He left the band in 2002 after a bitter dispute with Damon Albarn but later re-joined in 2008. He has been featured on all seven Blur albums and has written many of the tracks including the hits "Tender" and "Coffee & TV". Coxon designed the cover art for Blur's 13 album and all of his solo albums. Graham was voted 15th greatest guitarist of the last 30 years in a 2010 BBC poll. He has released eight solo albums from 1998 to 2012. Graham has a daughter with his girlfriend Essy Syed and another with former girlfriend Anna Norlander.