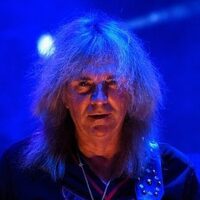 Glenn Tipton net worth: Glenn Tipton is an English guitarist who has a net worth of $25 million. Glenn Tipton was born in Blackheath, England in October 1947. Tipton is best known for being the guitar player for the heavy metal band Judas Priest. He learned how to play the guitar at 19 and his first band was named Shave Em' Dry which turned into Merlin and then Flying Hat Band. In 1974 he joined Judas Priest. The band went on to release 17 studio albums as well as 5 live albums. They have sold over 45 million albums worldwide including 12 million in the United States. The band's best-selling album was 1982's Screaming for Vengeance which was 2x Platinum. Judas Priest was named the second Greatest Metal Band of all time by MTV. They were the inaugural inductees into the VH1 Rock Honors in 2005 and won a Grammy Award for Best Metal Performance in 2010. Tipton also released the solo albums Baptizm of Fire in 1997 and Edge of the World in 2006. He has been ranked #9 on MusicRadar's The 20 Greatest Metal Guitarists Ever and #19 on Hit Parader's list of 100 greatest metal guitarists.