What is Glenn Danzig's Net Worth?

Glenn Danzig is an American musician and singer-songwriter who has a net worth of $4 million. Glenn Danzig along with his band went on to release nine studio albums in total, with two of them eventually being certified Platinum. Glenn also released two solo studio albums, one in 1992 and a second in 2006. He also is the owner of the Evilive Record Company and a publishing company for adult comic books called Verotik. Over his career, he has written songs for top names in the music business such as Roy Orbison and Johnny Cash.

Glenn Allen Anzalone was born in Lodi, New Jersey on June 23, 1955. The third of four sons, Glenn's mother worked at a record store and his dad was a US Marine veteran of both World War II and the Korean War. Glenn began listening to musicians like Black Sabbath, The Doors, and The Ramones at an early age. He also began reading the works of authors like Edgar Allan Poe, thus developing an appreciation for the horror genre.

Glenn started using drugs and alcohol and subsequently getting into fights and frequent trouble with the law at age 10, but he quit it all cold turkey when he was 15. Danzig graduated from Lodi High School in June 1973 with an aspiration of becoming a comic book creator. He went to the Tisch School of the Arts and the New York Institute of Photography before forming his own comic book company in the 90s, aimed towards adults, specifically, called Verotik.

His music style has encompassed punk rock, industrial, heavy metal, classic metal, and blues. At 11 years old he was a roadie and played in local bands as a teenager. Danzig took piano and clarinet lessons growing up and taught himself to play guitar and to sing.

Danzig started the band the Misfits in the '70s. They began releasing their records through Danzig's own label, Plan 9. After releasing several singles and three albums, the band only had a small underground following so Danzig disbanded the Misfits in 1983.

Danzig started a new band called Samhain in 1983. The band eventually began to attract a lot of interest from major labels such as Epic and Elektra. The band released six studio albums. Samhain eventually changed its name to Danzig in 1987 after they were finally signed to a major label by music producer Rick Rubin. That same year, Danzig was asked to write a song for Roy Orbinson, which became "Life Fades Away." The track was featured in the 1987 movie "Less than Zero." Danzig also wrote "You and Me" for the film's soundtrack.

The band Danzig released their first debut album in 1988. Their second album "Danzig II: Lucifuge" came in 1990 and moved in a different direction musically. In 1992, they once again changed musical direction when they released an album in a slightly darker style called "Danzig III: How The Gods Kill." In 1992, Danzig composed classical music in the form of the album "Black Aria," which debuted at No. 1 on the Billboard classical musical chart. Danzig wrote the song "Thirteen" for Johnny Cash in 1994. It appeared on Cash's album "American Recordings." 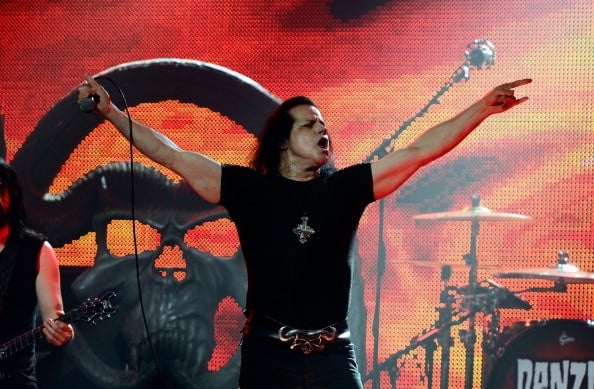 1996 saw the band undergoing a complete overhaul, with the original lineup completely falling apart. By then, Glenn's relationship with Rick Rubin was deteriorating along with his relationship with the band's record label, American Recordings. Danzig was later forced to engage in a legal battle with Rubin over unpaid royalties. Danzig once again explored a different musical style when they recorded "Blackacidevil," which was a fusion of heavy metal and industrial rock. Danzig's record deal with Hollywood Records was met with an outcry of several religious groups who boycotted Disney, the record label's parent company, for singing a "satanic" band. The label then pulled support for the album and the record deal was halted. They then signed with E-Magine Records and released three more albums.

Danzig embarked on a world tour in 2003 called Blackest of the Black. The band continued to tour and release albums, with Glenn releasing his second solo album, "Black Aria II" in 2006. Danzig in 2008 recorded the first duet of his career, with singer Melissa Auf der Maur on a song called "Father's Grave." In May 2016, the Misfits reunited and played two headlining shows together, the first time the band had performed together in 33 years. Meanwhile, Danzig the band released their first album in several years, "Black Laden Crown," on May 26, 2017. Danzig announced in September 2019 that there would not be any more Misfits tours.

Danzig had a minor role in Christopher Walken's movie The Prophecy II in 1998. He auditioned for the part of Wolverine in X-Men, which he was invited to, but his schedule did not allow for it. He did a guest appearance as himself on "Aqua Teen Hunger Force" and appeared in an episode of "Portlandia" in 2016. Danzig was also heavily involved in the production of his band's music videos. Danzig made his feature film directorial debut in 2019 with the anthology horror film "Verotika," which was written, directed, and scored by Danzig himself. Danzig announced in 2020 that his next film would be "Death Rider in the House of Vampires."

He has studied Jeet Kune Do and Muay Thai. Danzig is a fan of horror movies and Japanese manga/anime. He's an avid reader and owns a large book collection. He has been in a relationship with his girlfriend Ashley Michele Wisdom since 2019. 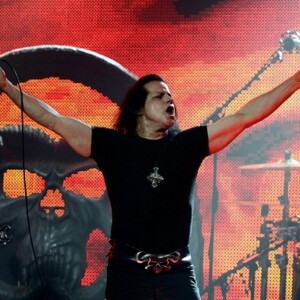