Glen Campbell net worth: Glen Campbell was an American musician who had a net worth of $50 million at the time of his death in 2017. Glen was also the host of "The Glen Campbell Goodtime Hour" on CBS. Over a career spanning five decades, he released 64 albums and sold 45 million records globally. Campbell started his professional career as an instrumentalist in Los Angeles' the Wrecking Crew before going solo as a country western musician in the 1960s; among his biggest hits were "Gentle on My Mind," "Galveston," and "Rhinestone Cowboy."

Early Life and Career Beginnings: Glen Travis Campbell was born in 1936 in Billstown, Arkansas as the seventh of an eventual twelve children. His parents, Carrie Dell and John Wesley, were of Scottish descent. The family lived on a farm with meager resources, but were able to sustain themselves by growing corn, potatoes, watermelon, and cotton. At the age of four, Campbell began playing the guitar when his father gifted him one he bought at Sears for five dollars. With a little instruction from his uncle Boo, Campbell was performing on local radio stations by the time he was six. He continued to play without formal training, honing his skills by listening to recordings of guitarists such as Django Reinhardt. Later, at fourteen, he dropped out of school to work with his brothers in Houston, where they installed insulation. Ultimately unsatisfied with this menial labor, Campbell began playing at fairs and in church, as well as on local radio. As a seventeen-year-old in 1954, he moved to Albuquerque and joined his uncle's band. Four years later, he established a band of his own called the Western Wranglers.

Los Angeles and the Wrecking Crew: Campbell moved to Los Angeles in 1960 to become a studio musician, and ended up joining rock-and-roll band the Champs. The following year, he found work at the publishing company American Music, where he wrote songs and recorded demos. It was due to this experience that Campbell became a part of the Wrecking Crew, a loose collective of LA session musicians whose services were used by many recording studios in the 60s and 70s. As part of the group, Campbell contributed his talents to a litany of recordings, playing on songs by Ricky Nelson, the Monkees, Nancy Sinatra, Paul Revere & the Raiders, the Kingston Trio, and the Beach Boys, among numerous others.

Slow Rise to Solo Success: After leaving the Champs in 1961, Campbell was signed by Crest Records and released his first solo, "Turn Around, Look at Me." It was only a moderate success, reaching number 62 on that year's Hot 100. Although his subsequent singles and albums under Capitol Records were met with similar ambivalence, Campbell had nevertheless played and sung on nearly 600 songs by 1963. The singer had his biggest solo hit yet in 1965, when his cover of Buffy Sainte-Marie's "Universal Soldier" peaked at number 45 on the Hot 100.

Disappointed by the underperformance of Campbell's follow-up singles, Capitol paired the singer with producer Al De Lory. The partnership paid off when "Burning Bridges," Campbell's and De Lory's first collaboration, became a top 20 country hit in 1967. Their success continued with a string of hits including "Gentle on My Mind," "By the Time I Get to Phoenix," "I Wanna Live," and "Wichita Lineman." For the first two of these tracks, Campbell won four Grammy Awards. Moreover, "Wichita Lineman" reached number three on the US pop chart, and remained on Billboard's Top 100 for 15 weeks. Further success came with the title song of the 1969 John Wayne film "True Grit," in which Campbell co-starred. The tune, which was sung by Campbell and written by Don Black and Elmer Bernstein, was nominated for Best Song at the Academy Awards.

Career on the Small Screen: Campbell was a regular on TV, starting with his appearances on 1964's "Star Route" and on ABC's "Shindig!" and "Hollywood Jamboree." After serving as a replacement host for "The Smothers Brothers Comedy Hour" in 1968, Campbell was given his own variety show, "The Glen Campbell Goodtime Hour." The program, which ran from 1969 to 1972, employed such famous comedy writers as Rob Reiner and Steve Martin, and hosted major musical acts including Johnny Cash, Willie Nelson, and Linda Ronstadt.

Campbell remained on TV following the cancellation of his program, hosting a range of specials and awards shows. He was also a frequent guest on talk and variety shows such as "The Tonight Show Starring Johnny Carson," "The Merv Griffin Show," and "The Midnight Special." 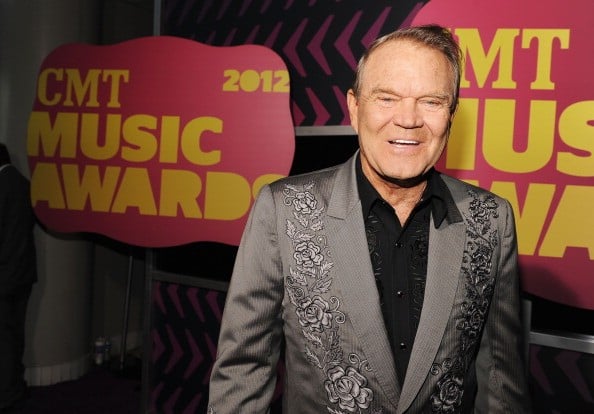 More Big Hits and Late Career: The 1970s was a prosperous decade for Campbell, as his tracks "Rhinestone Cowboy" and "Southern Nights" both became number one US hits. The former was Campbell's best-selling single ever, with over two million copies sold. Other hits from this period included "Sunflower," written by Neil Diamond, and "Country Boy (You Got Your Feet in L.A.)."

From 1982 to 1983, Campbell hosted a 30-minute syndicated music show. In 2005, he was inducted into the Country Music Hall of Fame, and in 2008, released his first album with Capitol in more than 15 years. A companion album, "Ghost on the Canvas," was released in 2010. That year, Campbell was diagnosed with Alzheimer's, prompting a final "Goodbye Tour" with three of his children. Upon concluding the tour, the singer recorded his final album, "Adiós," which would be released five years later. "I'm Not Gonna Miss You," his final recorded song, was featured in the 2014 documentary "Glen Campbell: I'll Be Me," and was nominated for a Best Original Song Academy Award.

Personal Life and Death: Campbell was married a total of four times. The first marriage was in 1955 to Diane Marie Kirk; they had two children, the first of whom passed away after being born prematurely. After a divorce in 1959, Campbell wed Billie Jean Nunley, with whom he had three kids. They divorced in 1976. The third marriage, to Sarah Jan Davis, produced one child. After they split in 1980, Campbell had a gossip-laden relationship with fellow country singer Tanya Tucker. Finally, in 1982, he married Kimberly Woollen, who was with him until his death. The couple had three kids.

In 2014, Campbell entered an Alzheimer's long-term care and treatment facility. Three years later, after a long struggle, he passed away in Nashville, Tennessee at the age of 81. Many tributes followed, from artists including Brian Wilson, Sheryl Crow, Anne Murray, and Dolly Parton. A few days later, the Country Music Television Channel aired a special covering his storied life and legacy. 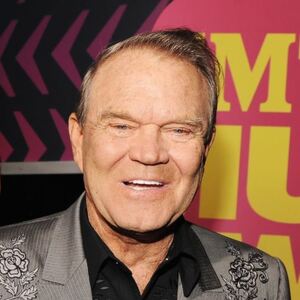