What is Gerard Way's Net Worth?

Gerard Way is an American musician and comic book writer who has a net worth of $20 million. Gerard Way is best known for being the lead singer and co-founder of the band My Chemical Romance. Gerard also wrote the comic mini-series "The True Lives of the Fabulous Killjoys" and wrote the Eisner Award-winning comic book "The Umbrella Academy."

As the compelling, pale-faced front man of dynamic punk-rock band My Chemical Romance, Gerard Way is one of a few key musicians credited with bringing emo and punk music into the mainstream eye at the turn of the millennium, and successfully sparking a million conversations about what is and is not considered punk in the process. As a kid, he was withdrawn, especially in contrast to his outgoing, life-of-the-party brother. Way spent a lot of time by himself sketching and listening to bands like Iron Maiden, the Smiths, the Cure, the Misfits and Queen.

Following high school graduation, Way enrolled at the School of Visual Arts in New York to study cartooning and illustration. He spent some time interning at DC Comics. He earned his bachelor of fine arts degree and eventually landed a gig working in toy design and animation. Way had always wanted to be in a band and though he played in a few random ones over the years, it wasn't until the September 11th attacks that he was motivated to do something important with his life. He witnessed firsthand the collapse of the World Trade Towers from his office window and found himself questioning how he was making a difference in the scheme of things. Soon afterward he wrote the song Skylines and Turnstiles, about the 9/11 events, back home in his parents' basement. Way then sought out high school friend and drummer Matt Pelissier and they recruited guitarist Ray Toro, Way's brother Mikey (on bass) and second guitarist Frank Iero and My Chemical Romance recorded their first album within three months of forming. The released their debut album in 2002.

Way was born in Summit, New Jersey on April 9, 1977 to parents Donna Lee and Donald Way, who are of Italian and Scottish ancestry. He was raised in Belleville, New Jersey with his brother Mikey. He first began singing in the fourth grade when he was cast as the role of Peter Pan in a school musical. He was also heavily influenced by the glam metal band Bon Jovi, as well as musician and singer Bruce Springsteen.

Way attended Belleville High School. He spent much of his time playing music and also working on developing comic books. He decided to pursue a career in the comic book industry and enrolled at the School of Visual Arts in New York City in 1995 following his high school graduation. He completed a Bachelor of Fine Arts degree in 1999.

Way had been involved a few bands throughout high school but had ultimately decided to concentrate on his art career. While working as an intern at Cartoon Network in 2001, Way saw the effects that the September 11th attacks had on the city, which inspired him to write the song "Skylines and Turnstiles." The song became the first of the band My Chemical Romance, which Way formed with drummer Matt Pelissier, guitarist Roy Toro, and his brother Mikey, who played the bass. Just before releasing their first album, guitarist Frank Iero also joined the band.

My Chemical Romance's debut album, "I Brought You My Bullets, You Brought Me Your Love," was released in 2002. After the album gained some traction with fans, the band was signed to Reprise Records in 2003. They released their second album, "Three Cheers for Sweet Revenge," in 2004, shortly after which Matt Pelissier was replaced with Bob Bryar on drums. The album went platinum a year after its release.

Throughout 2005, the band toured with The Used and Killswitch Engage. They also were the opening act for Green Day on their "American Idiot" tour and joined the Warped Tour in 2005. During this time, they were also working on their third album. "Life on the Murder Scene" was released in March of 2006 and included a CD as well as two DVDs which documented the making of the band and its history as well as music videos and live performances.

In April of 2006, the band started working on their next album with producer Rob Cavello, who had a long history of working with Green Day. The album, "The Black Parade," was released in October of 2006 and featured the single, "Welcome to the Black Parade," which became the band's first number one single in the United States. The album itself debuted at number two on the Billboard 200 chart in the US and the UK Albums Chart. It has since gone Triple Platinum  in both countries. The band toured extensively with the album. They released their final album in 2010 and then announced their break up in 2013.

After the break up, Way began working on solo music projects. He released a solo album, "Hesitant Alien," in September of 2014 and subsequently performed at a number of music festivals. He has continued releasing solo music, some of which features his brother Mikey on bass guitar. When he performs as a solo artist, he does so with a live band and calls the act Gerard Way and The Hormones. In 2020, he wrote an original song featuring singer Judith Hill which appears on the second season of "The Umbrella Academy." 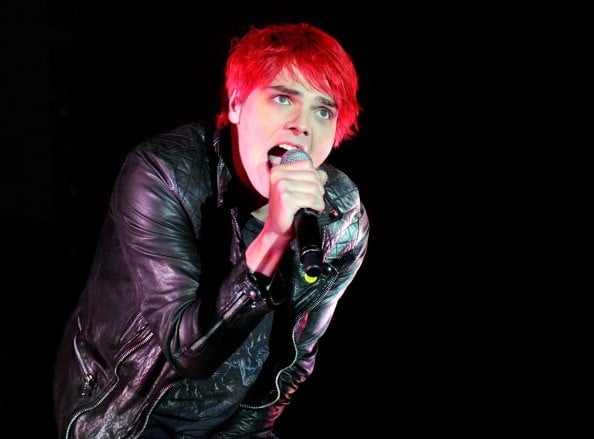 Throughout his music career, Way continued pursuing his interest in comic books. In 2001, he co-created a cartoon called "The Breakfast Monkey" which he pitched to Cartoon Network, though they declined to pick it up. He continued working on comics and characters but nothing became public until 2013, when Way made is television directorial debut on "The Aquabats! Super Show!" Way co-directed and co-wrote the season two finale of the series. He was part of the team that was nominated for a Daytime Emmy Award for Outstanding Writing in a Children's Series. Additionally, in 2013 he released "The True Lives of the Fabulous Killjoys," a limited comic book series.

In 2018, one of the characters that Way co-created, Peni Parker, appeared in "Spider-Man: Into the Spider-Verse." Since 2019, he has served as the executive producer on the television series adaptation of "The Umbrella Academy." He had originally co-created and co-written the series on which the show is based. The comic won a Will Eisner Comic Industry Award.

For much of the beginning period of My Chemical Romance, Way struggled with alcoholism and prescription drug addiction. However, he was able to become sober by 2007 and has since discussed having developed a much healthier relationship with alcohol.

In September of 2007, Way married Lyn-Z, the bassist of the band Mindless Self Indulgence. The low-key ceremony happened backstage after a concert in Colorado and was performed by a member of the touring staff who happened to be an ordained minister. In May of 2009, the couple had a daughter together whom they named Bandit.

Way has been open about his gender identity struggles in various interviews, stating that he has never identified with typical masculine traits. In 2015, he clarified that the prefers to use the pronouns he/they.