George Thorogood Net Worth: George Thorogood is an American musician who has a net worth of $60 million. Born in 1950 in Wilmington, Delaware, George Thorogood played semi-professional baseball before deciding to pursue a music career during the 1970s. He released his demo album, "Better Than the Rest", in 1979, five years after he recorded it.

Before its release, he dropped his debut album, "George Thorogood & The Destroyers". He went on to release "Move It On Over" with the Destroyers. In 1981, Thorogood landed a gig on tour with The Rolling Stones and scored an appearance on "Saturday Night Live" a year later. Thorogood released his most famous song to date, "Bad to the Bone", with EMI America Records in 1982. The song has gone to be featured in dozens of TV shows and movies, including "Terminator 2: Judgment Day", "Married… with Children", "Christine" and "Alvin and the Chipmunks". Since 1977, Thorogood has been part of 16 studio albums with the Destroyers, including five that were certified gold. He is now considered one of the 50 most influential people to come from Delaware in the last 50 years. He has been married to his wife, Marla Raderman, since 1985, and they have one daughter together. 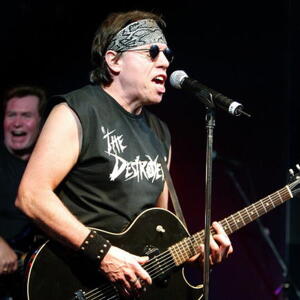