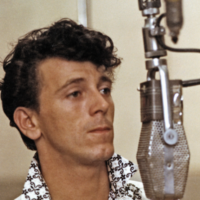 Gene Vincent net worth: Gene Vincent was an American musician who had a net worth of $400 thousand at the time of his death in 1971. He is most well known for his influences on the genre of rockabilly and his single "Be-Bop-A-Lula".

Gene Vincent was born in Norfolk, Virginia in February 1935 and passed away in October 1971. His musical styles included rock and roll, rockabilly, blues, and country and he played the guitar. Vincent was active from 1955 to 1971. He was inducted into both the Rock and Roll Hall of Fame and the Rockabilly Hall of Fame. Gene Vincent released his debut single "Be-Bop-A-Lula" in 1956 and it reached #9 in the US and #16 in the UK. He had a bit more success in the UK with singles like "Blue Jean Bop", "My Heart", and "Pistol Packin' Mama" reaching the Top 20. Vincent's single "Lotta Lovin" reached #14 in the US. He released many albums over the years starting with his debut album Bluejean Bop! in 1956. Gene Vincent passed away on October 12, 1971 at 36 years old from a ruptured stomach ulcer.