Gary Glitter net worth: Gary Glitter is a English musician who has a net worth of $8 million dollars. A prominent artist in the glam rock scene of the 70's, Gary Glitter has released seven studio albums. Some of his hit songs include, "I Love You Love Me Love", "Hello, Hello, I'm Back Again", and "Rock and Roll-Parts 1 & 2".

Glitter was born Paul Francis Gadd in Bandury, Oxfordshire, England in May 1944. In the 1970s he became a popular musician with hits such as "Rock and Roll, Parts One and Two", "I Love You Love Me More", "Hello, Hello, I'm Back Again", and "I'm the Leader of the Gang (I Am)". Over the years Glitter has released seven studio albums and over 15 live or greatest hits albums. He has had three #1 hits on the UK Top 100 charts. His song "Rock and Roll, Part 2" can still be heard at many American sporting events. He almost went to prison and received a ten-year ban from driving in 1987 for being convicted three times for driving under the influence. He was convicted for possession of child pornography as well as obscene acts with minors. He was faced on the Sex Offenders' Registry for life. He started Glitter's Snack Bar in 1991 in London and launched Attitude Records. Glitter's latest release was the 2001 album On. Glitter said in 2008 that he was planning on recording a new album after he was released from prison. He also said that he planned on writing a book that would prove his innocence. In 2012 he was arrested again and in 2015 he was found guilty on five counts dating back to the 1970s for which he is serving a 16 year sentence. 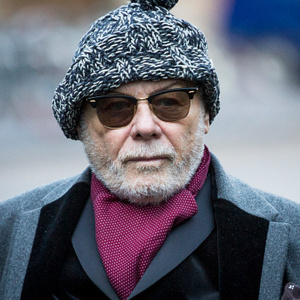