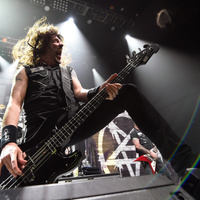 Frank Bello net worth: Frank Bello is an American musician and actor who has a net worth of $6 million. Frank Bello was born in July 1965. He is best known for being the bass guitarist of the band Anthrax. He also plays guitar and provides background vocals. Anthrax formed in 1981 and released their debut studio album Fistful of Metal in 1984. They released the albums Spreading the Disease in1 985 and Among the Living in 1987. Anthrax released the album State of Euphoria in 1988 which reached #12 in the UK. Their album Persistence of Time was released in 1990 and reached #4 in New Zealand. Anthrax released the album Sound of White Noise in 1993 and it reached #7 on the Billboard 200 chart. They have also released the albums Stomp 442 in 1995, Volume 8: The Threat Is Real in 1998, We've Come for You All in 2003, Worship Music in 2011, and For All Kings in 2016.